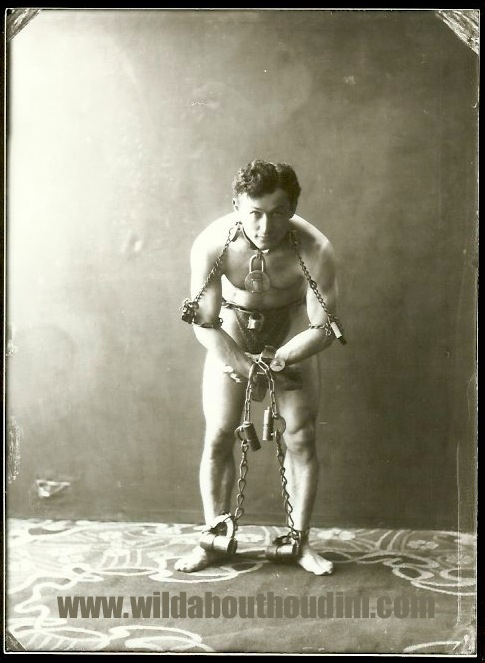 Recently I purchased on eBay this photo struck from an original glass negative, because it's a shot of Houdini that I've never seen. No, I'm not crazy. I know what you are thinking -- this is just an uncropped version of a famous photo we've all seen a million times!

Click here and look closely at the "classic" photo. While it was certainly taken during the same photo session in either Germany or The Netherlands in 1902/03 (best guess), it is not the same photo at all. I actually think this unknown shot is much better.

Look closely at the new photo and you'll see Houdini is standing a little more upright, his eye contact and expression is much better, and in this photo we can clearly see the collar that encircles his neck. The collar is not visible at all in the classic image. And while Houdini's hands and feet are in exactly in the same position, leading one to assume this pic was taken only moments before or after the other, there is a MAJOR difference that refutes this. Can you spot what this is? I didn't even see it until after I bought the photo.*

By my count this is now the fourth version of this famous pose (and at least the ninth photo from this session in general). Photo #1 is the near identical shot without the visible collar (and the big mystery difference). Photo #2 is the other famous shot of Houdini looking slightly away and taking a step with his right foot (check out Gresham for the best reproduction of this photo). Photo #3 is in Christopher's Houdini A Pictorial Life

and shows him in a similar step pose, but sans the upper shackles. And this is Photo #4, the John Cox image. (Ha! I wish. I'm sure this seller made several copies, so watch eBay and you might be able to nab one for yourself.)

Now for fun click here and check out how various actors who have played Houdini have attempted to recreate this famous pose. Somehow Houdini had the ability to rock chains and a loincloth in a way others just can't quite pull off.

UDADTE 2: I've now established that Houdini took these photos in September 1903 at the studio of J.F. Blöte in Groningen, Holland. See: Houdini in 1903.
Written by John Cox at 3:00 PM