Houdini, Tarzan, and the Perfect Man

Recently I was watching a documentary about strongmen such as Eugen Sandow and I was reminded of this 2001 book, Houdini, Tarzan, and the Perfect Man: The White Male Body and the Challenge of Modernity in America by John F. Kasson. It offers a study of Houdini from a different perspective and is well worth adding to your library, if you haven't already. 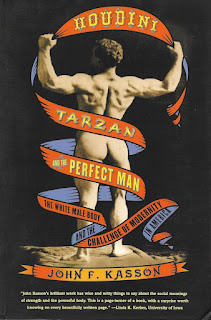 In his exciting new book, John F. Kasson examines the signs of crisis in American life a century ago, signs that new forces of modernity were affecting men's sense of who and what they really were.

When the Prussian-born Eugene Sandow, an international vaudeville star and bodybuilder, toured the United States in the 1890s, Florenz Ziegfeld cannily presented him as the "Perfect Man," representing both an ancient ideal of manhood and a modern commodity extolling self-development and self-fulfillment. Then, when Edgar Rice Burroughs's Tarzan swung down a vine into the public eye in 1912, the fantasy of a perfect white Anglo-Saxon male was taken further, escaping the confines of civilization but reasserting its values, beating his chest and bellowing his triumph to the world. With Harry Houdini, the dream of escape was literally embodied in spectacular performances in which he triumphed over every kind of threat to masculine integrity -- bondage, imprisonment, insanity, and death.

Kasson's liberally illustrated and persuasively argued study analyzes the themes linking these figures and places them in their rich historical and cultural context. Concern with the white male body--with exhibiting it and with the perils to it--reached a climax in World War I, he suggests, and continues with us today.


Houdini, Tarzan, and the Perfect Man: The White Male Body and the Challenge of Modernity in America can be purchased from Amazon.com and Amazon.co.uk.

Speaking of Houdini as a specimen, this weekend I will post excerpts from a remarkable 1923 Back to Nature article in which Houdini shares his sometimes peculiar views on health and fitness. It's a good one!