Houdini to the minute

Here's a clipping from the January 15, 1923 St. Louis Post Dispatch that is unlike any other Vaudeville advertisements I've encountered while working on my Chronology. Most ads are in the style of playbills that list the performers by importance. Houdini, of course, tops the bill. But this ad shows the acts as they actually appeared during the course of the twice daily shows. 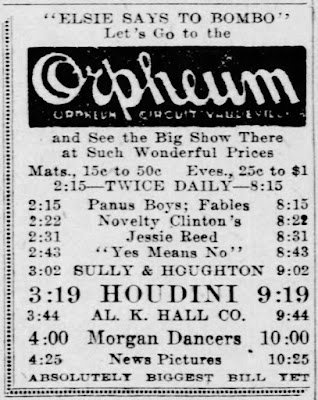 I love this for the insight it provides. Here we can see Houdini took the stage at exactly 3:19 PM (matinee) and 9:19 PM (evening). It also shows us Houdini's act was exactly 25 minutes in length, matching the Morgan Dances as the longest acts on the bill. Houdini's act on this tour featured the Needles and the Water Torture Cell, although sometimes a challenge would be performed instead of the USD.

Here's a bit of extra trivia about this particular engagement. On the evening of January 17th, St. Louis Mayor Henry Kiel went on stage as part of Houdini's committee.