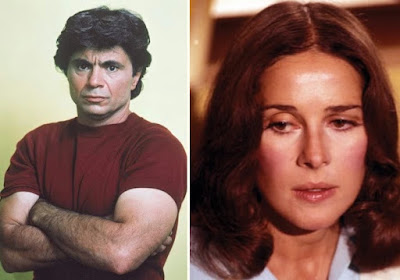 It's not generally known that when Melville Shavelson was preparing his 1976 TV biopic The Great Houdinis for ABC, a rival Houdini movie was in the works at NBC called The Heart Is Quicker Than The Eye. Produced by Paramount and Playboy Productions, the aim was to air the film in October to commemorate the 50th Anniversary of Houdini's death. Of course, this was also the proposed air date for the ABC film.

When asked about the coincidence of two Houdini projects, Edward L. Rissien, executive VP of Playboy Productions said, "There are many instances where a personality lends itself to two different treatments. We are proceeding as announced for NBC."

Patrick Culliton, who worked as a technical advisor on the NBC project, says two names producer Bill McCutchen mentioned for the role of Houdini were Robert Blake and Charles Bronson. Bronson was a big movie star so that was probably wishful thinking. But Robert Blake was a real possibility and a good choice. Blake was the star of the hit TV show Baretta at this time. Actress Joan Hackett was mentioned as a possible Bess. While no casting was finalized, production was announced to begin March 15, 1976. 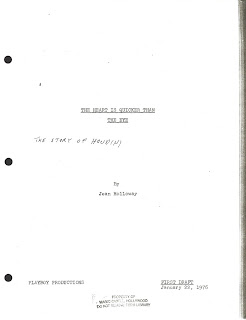 A copy of the screenplay by Jean Holloway resides at the The William H. Larsen Sr. Memorial Library at The Magic Castle. What's most striking is how close this script follows the Harold Kellock book, Houdini His Life Story. It's almost as though Holloway had the book opened in front of her and transcribed it beat for beat. But this means The Heart is Quicker Than The Eye would have been the most accurate of all the Houdini biopics. Hardeen, Martin Beck, Margery, and Sir Arthur Conan Doyle all feature in the film. And while Houdini does break his ankle in the Water Torture Cell, he does not die in it. In fact, his death is for the first time depicted accurately.

But somehow all this doesn't make for a better movie. The script is plodding, repetitive, and strangely dull. "I suffered through a treatment and three drafts of Jean Holloway's script as a research man," says Patrick. "I hated them all."

One original aspect Holloway introduces is the suggestion that Bess possesses true powers of extra sensory perception that she does not fully understand. But she is able to foretell events and successfully warn her husband off danger (when he'll listen). This is pretty interesting and I love the irony that Bess is the Houdini with the true powers. But it isn't developed far beyond the first act, and Bess's role in the film is largely to be a worried wife.

A fun detail is when Houdini is examined by a doctor for a burst blood vessel in his kidney (a regular source of pain for him in this script as it was in real life). The doctor's name is Larsen. Is this a nod to the famous Larsen magic family of Magic Castle fame? Could they have even considered having Bill Larsen Jr. play the role? Remember Bill was in Houdini (1953) as the S.A.M. head chopping magician, so this would have been a fun nod to this first Houdini biopic.

So what happened to The Heart Is Quicker Than The Eye? Despite Playboy's assurance that they were moving ahead, it appears the announcement of The Great Houdinis was enough to give the network cold feet. Says Patrick, "At that time, a decision to go with our Houdini movie took NBC a year, the decision for ABC to go with Mel Shavelson's project seemed to have been made in a week. Bill McCutchen was trying to save his project, but, it was over. We'd been scooped."

Patrick went on to work on The Great Houdinis, and even appears in the film as Franz Kukol.

The novelization for The Great Houdinis says it is a co-production with Playboy, so it's possible some kind of agreement was worked out between the networks and production companies. Whatever the case, The Heart Is Quicker Than The Eye was shelved and ABC's The Great Houdinis was the sole Houdini film to take to the airways that anniversary year.