Climb aboard the Frisia

Here's a cutaway model of the German steamship SS Frisia that resides in the Smithsonian. What's this have to do with Houdini? Well, it was the Frisia that the Weiss family boarded in Hamburg 142 years ago today bound for America. It was the first ocean voyage for the 4-year-old Ehrich Weiss. 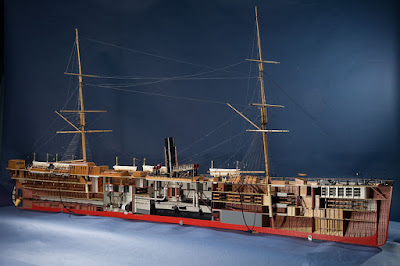 Built in 1872 by Caird & Co. in Scotland, the Frisia (originally launched as the Alsatia) was part of the Hamburg-American Line. It had room for 820 passengers and could make the Atlantic crossing in about 12 days. Frisia was one of the last iron steamships of its era. Following its run as an immigrant ship, Frisia was sold to Italian owners who converted it into a coal carrier. In 1902, the ship, then known as the Arno, was scrapped in Italy. 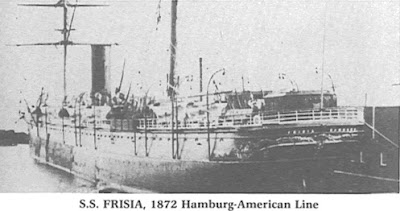 You can see many more photos of the SS Frisia model at the Smithsonian's American History website.

For more information about the Weiss family immigration check out Houdini Comes To America by Ronald J. Hilgert and Houdini: Escape into Legend, The Early Years: 1862–1900 by Manny Weltman.