I just received some wonderful news from our friend Tom Boldt in Appleton, Wisconsin. This morning the City of Appleton re-installed Richard C. Wolter's "Metamorphosis" sculpture after a 9-year absence. The sculpture now sits on a pedestrian trail along the Fox River near the site Houdini claimed to have almost drowned as a child. 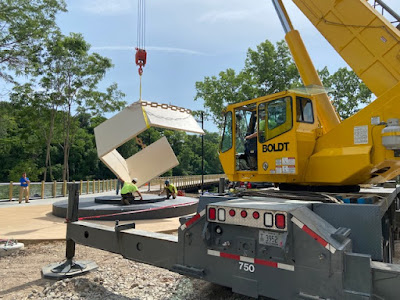 "Metamorphosis" was donated to the city in 1985 by Boldt Development Corp. (yes, as in Tom Boldt). It stood in the center of Houdini Plaza until 2010, when it was removed because the base was deteriorating. Houdini Plaza underwent a major renovation in 2013 with a new centerpiece. A Houdini bust was added in 2015.

I've always loved this sculpture and I'm thrilled to know it is once again on view in Houdini's hometown.

Thank you Tom for this tribute, and the great news today!