Here are some great photos of Houdini's suspended straitjacket escape from the Star-Telegram Building in Fort Worth on January 13, 1916. This was the first stop of his first tour of Texas. The initial images show Houdni testing the scaffolding in front of the newspaper's headquarters at 815 Throckmorton along with his police challengers. The paper asked, "Will Texas prove his Waterloo?" 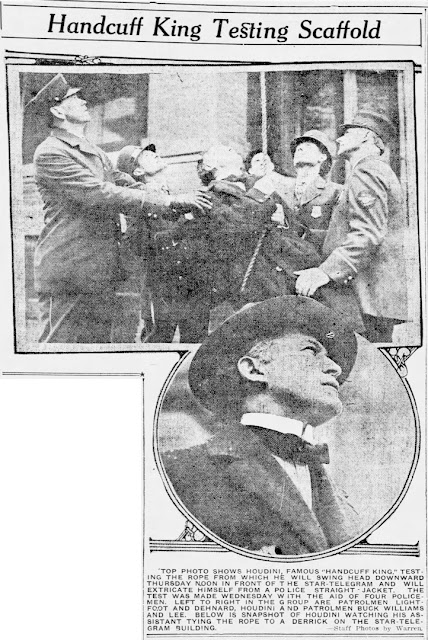 The successful escape was witnessed by some 4000 Texans who packed the intersection of Throckmorton and 8th Street as seen below.


I'm always excited to find images of Houdini's suspended straitjacket escapes from this era. Most photos and film footage are from 1923-24 when big cities looked more like...big cities. But in 1915-16 many cities still looked like towns with older buildings that give it all a different flavor. (Houdini repeated the stunt in Fort Worth in 1923.)

Today the site of the original Star-Telegram Building is a parking lot. But the paper survives with offices just one block over on 8th Street.

This wasn't the only outdoor stunt Houdini is said to have performed in Fort Worth during this 1916 engagement. An account of a somewhat bizarre second feat appears in the 1973 book, Locklear: The Man Who Walked On Wings by Art Ronnie. This is a biography of Ormer Locklear, a Texas daredevil who would later become a famous wing-walker in Hollywood. Below is an edited excerpt:

One block from the Majestic was the Trav Daniel Sporting Goods store, where James, Ormer's younger brother, was working as a clerk. One day, to the delight of the clerks and customers, the magician came in to buy a pair of white Spaulding track shorts. "They're pretty good for underwear," he explained to James, standing behind the counter in awe of the illusionist. Finally able to talk, James blurted out that he enjoyed Houdini's act at the theater. He had also seen Houdini free himself from a strait-jacket while hanging upside down from the scaffold swung from the top of the Star-Telegram Building. Susceptible to flattery, Houdini talked about his act to his young admirer. During their conversation, James mentioned his brother's trick motorcycle riding. Houdini was amazed. A plan to use Ormer's daring to his advantage was already forming in his inventive mind and he asked to meet the "crazy fellow who would ride a trick motorcycle." Houdini liked the man he met. Satisfied, Houdini made the unusual suggestion that Ormer drag him, fettered, behind his motorcycle down Fort Worth's Main Street. "The publicity will be good for me and my act," Houdini said in his rough way. Only after Houdini's assurance that he would take certain precautions against injury did Ormer agree to go through with the stunt. 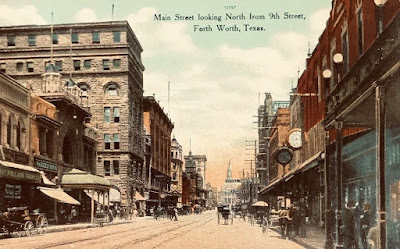 Houdini chose Main Street for his demonstration because it was the first "paved" street in Fort Worth. A series of wooden blocks, or round stumps, has been recessed into the street to protect the hooves of horses from injury. To protect himself, he wore a thick quilted overall. A hood to shield his head gave him the appearance of an Eskimo. Eager volunteers, attracted to the scene by the gathering crowd, tied his hands behind his back. A length of rope from Ormer's motorcycle was then attached to Houdini. The starting signal was given and with one last apprehensive glance behind him, Ormer reluctantly gave the gas to his cycle. Moving ever so slowly at first and then assured that his "passenger" wasn't being hurt by the jouncing about, Ormer gradually increased speed. But before he could attain real momentum, and much to his relief, it was all over. Houdini was free from his bonds and then from the rope attached to the motorcycle. The publicity paid off. The rest of his stand in Fort Worth, Houdini played to a packed house.


It's a great story. I think my favorite part is learning Houdini wore white Spaulding track shorts as underwear. However, I've never been able to corroborate it. I cannot find any photos or a single newspaper account. It does appear in a several Houdini books (Cartlidge, Silverman, Kalush), but their source is the Locklear book, which, as far as I can tell, is the only source for this second Fort Worth street feat.

So did it really happen? Or is it a Texas-sized Houdini myth? Ormer looks like he knows, but he's not talking!