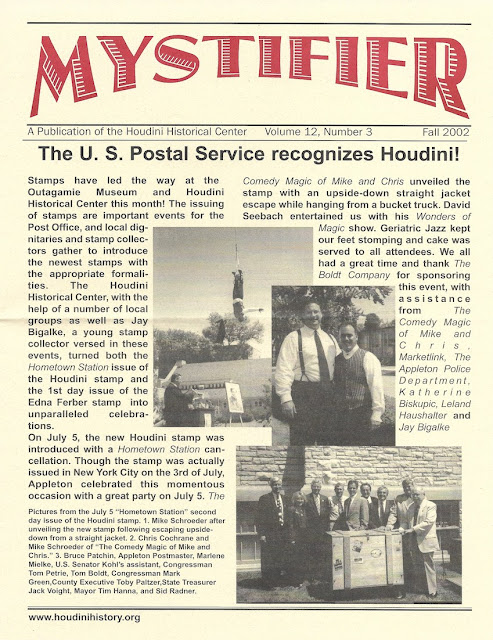 The Fall 2002 Mystifier celebrates the coming of the U.S. Postal Service's First Class Houdini stamp. This was a personal triumph for the HHC and Sidney Radner who had lobbied long and hard for this recognition. The newsletter contains photos and a report from the HHCs own dedication ceremony on July 5. For the occasion, Wisconsin-based escape artist Mike Schroeder performed a suspended straitjacket escape.

The newsletter continues with news of a second big event; the unveiling of John Gaughan's restored Water Torture Cell. The cell was displayed at the Center for Jewish History in New York from July 3 to August 5. The newsletter includes a photo of John with the USD, which for many was probably their first look at the restoration. It also has a Q&A with John. Below is a sampling:

Mystifier: Did you understand the mechanism in the Water Torture Cell before you began?

Mystifier: What was the most difficult part of the project?

JG: To be faithful to the original design. Not to cut corners but to use exact materials and methods of the original. The restoration used rare Honduras mahogany with a ribbon pattern, just as in the original. I used lap joints in the construction, as in the original to allow for the expansion and contraction that would occur when it was filled with water.


The newsletter continues with the sad news of the death of Ronald J. Hilgert, HHC member and author of Houdini Comes to America (1996). The museum shop announces new items related to the Houdini stamp, such a first day covers and pins. Recent donors are listed along with the staff of the HHC, which we now see is headed by Executive Director Terry Bergen who will prove controversial.

In his regular "Backstage" column, Sid (sporting a new column photo) talks about the HHC stamp event and the restored Water Torture Cell. He expresses disappointment that he was not invited to the official unveiling of the stamp in New York City. That ceremony featured David Copperfield (in a suit matching the one we see Houdini wearing in the stamp image) and Marie Blood. But Sid deems the Appleton ceremony as being the "much more impressive stamp dedication" and points out that it was covered by four TV stations.

Finally, it's worth pointing out that this issue introduces a few stylistic changes. No longer are the Contents listed on the cover. The font size is also increased (actually, the font sizes and styles are wildly inconsistent). This would also prove to be the last Mystifier printed in two colors.