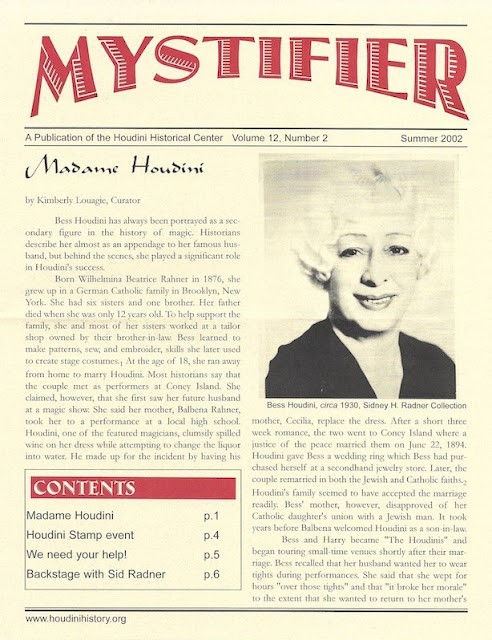 The Summer 2002 Mystifier features a lengthy profile of Bess aka "Madame Houdini" by HHC curator Kimberly Louagie. It contains mostly known information, but a gem is the reproduction in full of a letter Bess wrote to Hardeen on April 21, 1911. Letters written by Bess during Houdini's lifetime are uncommon, so this is something special. It's written to Dash in secret after Harry and his brother appear to have had a fight. I'm taking the liberty of reproducing it here:

My dear Bro. Dash,
Just heard that you were not coming over here, and the reason why. Now Dash, please do come over and if Harry does not pay the difference I will. Harry does not know I'm writing this. Now I want to tell you why he is sore. You know we are playing all the towns that you played, and of course there are plenty of guys always ready to tell H. about your challenges and what you did, and H. told me you had promised not to do challenges etc. Of course he is sore now, but I am sure if he sees you he'll forget all about it. Harry is working to death, he looks so old, he's quite gray and I am afraid he is over doing it all. Now please Dash come over. I'm looking forward with pleasure of seeing Elsie and Baby Harry, but I hope you will come with them, and I am ready to help to keep my word about paying the difference (you know I have a bank account). Please let me know at once if you come.
I am as ever your loving sister Bess.


Following the Bess piece is a plea to "Friends of Houdini" for donations to the HHC by Executive Director JoEllen Wollangk. There are also details of a special party on July 5, 2002 to celebrate the upcoming Houdini stamp.

Page five contains another rare treat. It's a facsimile reproduction of an Oath of Secrecy signed by Houdini assistant John Boyd on May 7, 1913. I admit John Boyd is a new name to me.


Sid Radner's photo is omitted from his "Backstage" column this time. Sid discusses the above oath and how oaths such as these are why one doesn't read exposures from Houdini's assistants. Sid again claims all published accounts of how Houdini did his Water Torture Cell are incorrect. He then says something very intriguing regarding the Mirror handcuffs:

At the present time the secret of the London Daily Illustrated Mirror Handcuff escape is still unknown to the public. I know the answer but I am not convinced that revealing the secret serves any good purpose.


What exaclty did Sid know???

Sid finishes by saying he has been in touch with a newly discovered member of the Houdini family and that he will reveal more in a future Mystifier. (Sid sure loved to withhold, didn't he?)

The newsletter ends with the special announcement that the recently restored Water Torture Cell will be unveiled at the American Jewish Historical Society of New York. There's also a reproduction of Josolyne's illustration of Houdini's Walking Through a Brick Wall from Weird Wonders for Wizards (1925), which is a correction to the last issue which mistakenly used Gibson's illustration from Houdini's Escapes and Magic.