While doing research on Houdini's short-lived Burlesque troupe the American Gaiety Girls, I was excited to stumble on this ad and photo. But then I realized this is from 1915, so these are not the "Gaiety Girls" of Houdini's time. But it's interesting to see that the name lived on, and this is a pretty fun ad. Oh you kid! 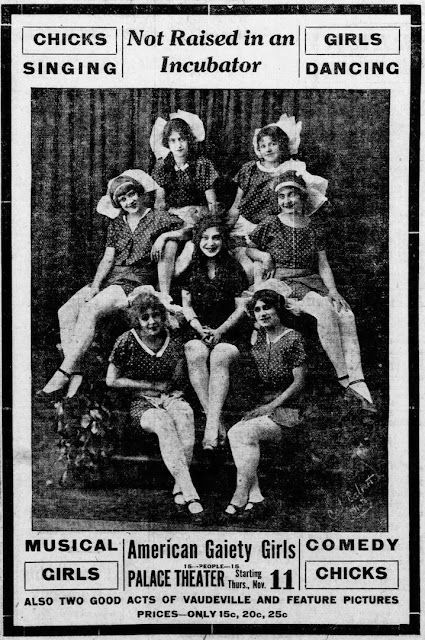 For those who have no idea what I'm talking about, from October 1895 to April 1896 Houdini and Bess traveled as part of a burlesque show called the American Gaiety Girls. Houdini actually co-managed the company, and I've seen at least one reference to it being called "Harry Houdini's American Gaiety Girls." But Houdini's sensibilities weren't suited to burlesque (reviewers called it "a good, clean show," which likely disappointed true fans of the genre) and the company failed after its business manager, Fred Harvey, was arrested for misappropriating funds.
Below are two ads for the American Gaiety Girls from Houdini's time that give a good idea of what the show featured (including the Houdinis).
Related:
Written by John Cox at 7:19 AM