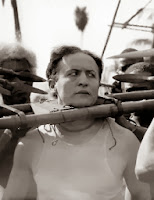 Houdini lived in Beverly Hills on Wednesday night when a clip from Terror Island was screened as part of Ricky Jay's "Like Magic" presentation at the Academy of Motion Picture Arts and Sciences Samuel Goldwyn Theater. The talk covered magic in the movies from early cinema pioneers like Georges Méliès to modern special effects masters. Houdini's involvement in cinema was noted with the Terror Island clip (the gallows scene) along with still images from The Master Mystery and The Grim Game.

Ricky also mentioned that it had recently come to light that Houdini performed as part of a "traveling cinema show" in the late 1890s. I admit this was the first I'd heard of this and would certainly be interested in hearing more.

Ricky Jay was joined onstage by illusion engineer Michael Weber and special effects artist Shane Mahan, who discussed some of the practical special effects magic he's created for films like Terminator 2 and Iron Man. The evening also included clips from The Escape Artist, The Illusionist, and some wonderful early cinema showcasing sleight of hand. The evening concluded with Ricky Jay performing Robert-Houdin's classic orange tree automaton illusion (from the collection of John Gaughan).

It's worth noting that Ricky Jay and Michael Weber are magic consultants on the Broadway Houdini musical starring Hugh Jackman, the fate of which is to be decided next month.

Speaking of Ricky Jay, the 2012 documentary, Deceptive Practices: The Mysteries and Mentors of Ricky Jay, has recently been released on DVD and is a MUST watch. You can check out the trailer on YouTube.
Written by John Cox at 10:14 AM