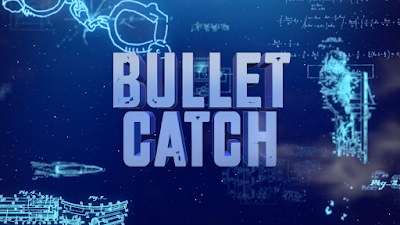 The Bullet Catch is the subject of the second episode of Houdini's Last Secrets. This might seem odd as the Bullet Catch is known as the one trick Houdini didn't do. (He announced he would in 1918 after the death of Chung Ling Soo, but was talked out of it by Harry Kellar.) However, there is some evidence that he might have done the trick very early in his career, and that leads the team into their investigation.

I think this second episode, "To Catch A Bullet", is a big improvement over episode one. This time the focus remains on the Bullet Catch--no nonsense about Houdini being a spy--and the show does a nice job investigating its history in interviews with Ben Robinson, author of Twelve Have Died, and Stephen Fenton, a Chung Ling Soo collector and expert. We also get to see the great Kevin Connolly surrounded by his magnificent Houdini collection. 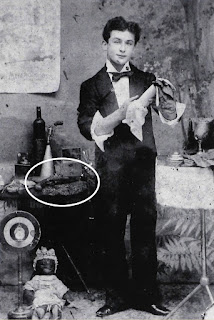 I also pop up again (last time, I promise!) to "reveal" Houdini's own account of doing the Bullet Catch in the October 1936 issue of The Sphinx. This appears to corroborate a mention by Jack Hyman as related by Edward Saint in the April 1937 Genii. And then there's that "horse pistol", just as Houdini describes, clearly visible in a famous early photo of him with his magic apparatus (right).

What didn't make the cut was me saying that I wouldn't conclude Houdini did the Bullet Catch based on just this. I'd need to see something independent of Saint and Houdini, such as a newspaper account from the time. So we're not there yet.

But the show kinda used my interview to tip the scales toward the idea that Houdini did in fact do it, and that's fine. I think they did a good job of presenting the evidence and making it seem plausible. In this way, I think they've captured the real fun of investigating the puzzle that is Houdini's life, and it makes me look forward to upcoming episodes on the Carette and Buried Alive, of which there is much more to chew on.

Structurally the show is split between two investigative paths. As George Hardeen looks into the history of the Bullet Catch, Steve Wolf at Stunt Ranch tries to engineer his own version for magician Lee Terbosic to perform. It's all very Mythbusters-like. They even have their own Kari Byron in Salina Cram.

I confess I don't know how the Bullet Catch is done (apart from Chung Ling Soo's method, which the show does explain), so I'm not sure what lines if any they cross in regards to exposure. But this episode makes it clear they are engineering their own methods, and apart from the pig cadaver silliness, I found the these sections pretty captivating. I'm especially surprised to learn how deadly blanks can be even from a distance.

Everything about this episode works, including having genuine tension at the end when Lee does the deadly trick himself. Does he survive? I'll leave that for you to discover. 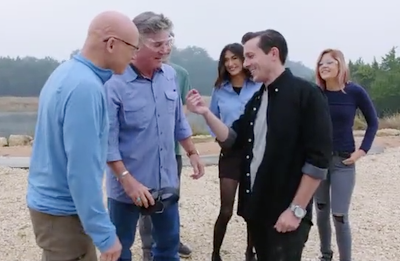 Houdini's Last Secrets airs on the Science Channel and the SciGO app. You can also stream episodes at their website, or purchase the series via Amazon and iTunes.

If you're interested in more information on Houdini and the Bullet Catch, check out the below links:


Did Houdini do the bullet catch in the 1890s?
The death of Chung Ling Soo
Did Hardeen reveal Houdini's most secret secret?
Houdini in 1918
Houdini's Last Secrets - Episode Guide
Written by John Cox at 7:19 PM