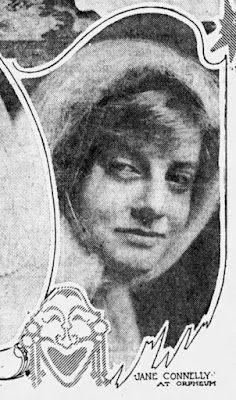 Recently I stumbled on an advertisement showing Houdini on the same vaudeville bill as his future co-star in The Man From Beyond, Jane Connelly. Jane had never appeared in a movie before, and I've often speculated that Houdini may have known her and her husband, Erwin, who also appears in the movie as Dr. Gregory Sinclair, from vaudeville. This clipping seemed to confirm that.
This led me to do a little investigation into Jane's career before she went Beyond. Here's what I found.
Jane and Erwin Connelly appear to have started their vaudeville careers around 1907. Their act was a presentation of the popular english sketch, "Sweethearts," written by W.S. Gilbert. Here's a review from the January 26, 1907 Birmingham News:

"Sweethearts," as presented by Mr. and Mrs. Connelly, seems really more than a vaudeville turn, for the audience feels, as the curtain slowly descends upon the reunion of sweethearts of long ago, true to each other for forty years, as though a drama of several acts was just closing. It is called a "dramatic contrast," for it shows not only the bashful lover filled with the vigor of youth pleading his cause with a maiden, for after forty years waiting they are united, showing a pretty picture, old as love itself. The sketch was written by W.S. Gilbert famous for his composition of "H.M.S. Pinafore."

Unlike Houdini, most vaudevillians did not change their act. That was certainly the case with the Connellys who toured with "Sweethearts" for over 10 years. The first time I find them sharing the bill with Houdini is at Shea's Theater in Buffalo in October 1911. They appeared together again at the Maryland in Baltimore in 1912 and at Keith's Theater in Rhode Island in 1915.
But it wasn't just Houdini who shared the bill with the Connellys. Check out this appearance by Hardeen at the Columbia Theater in Davenport in April 1916.
You'll notice the act is now billed as Jane Connelly & Co. Ewrin was still part of the act, but Jane was now featured more prominently in advertising. (I can't help but be reminded here of Bess Houdini's belief that billing an act as husband and wife was a bad idea.) The photo at the top of this post is from San Fransisco in 1915 and is a good example of this. Interestingly, that engagement saw the Connellys on the same bill as the Marx Brothers.
Despite a story in The Man From Beyond press book that says Houdini cast Connelly because she perfectly matched a composite photo of famous "psychic types" (you can read about that here), I think it's pretty clear Houdini knew the Connellys from vaudeville and felt comfortable casting the experienced actors in these important supporting roles. It's even possible the Connellys would have been familiar to audiences of the time and that offered some additional appeal. This was their first appearance in a film, and the movie does provide them with a nice scene together.
The Connellys continued to perform in vaudeville into the 1920s, broadening their repertoire with new comedic sketches written by Erwin such as "A Tale of a Shirt" and "A Strong Cup of Tea". The only other film Jane would appear in was Buster Keaton's classic Sherlock Jr. (1924), again with Erwin.
In 1925 Jane died at her home in Los Angeles. She was only 42. The below is from Variety. I'm not sure what to make of the cause of death being "a nervous breakdown." 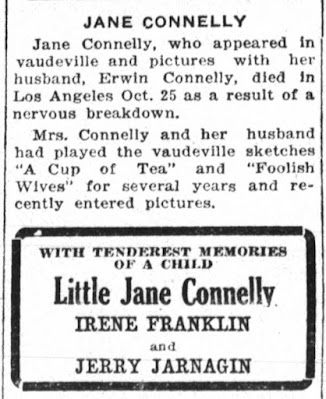 After Jane's death, Erwin continued to appear in films, including an uncredited appearance as The Zouave in Rudolph Valentino's final film, The Son of the Sheik (1926). He died from injuries suffered in a car accident in 1931.
Clippings: Newspapers.com
Related:
Written by John Cox at 8:08 AM