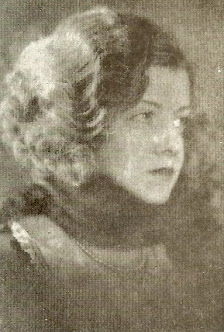 A mystery of Houdini's movie career is why he chose an unknown, first-time film actress as the leading lady in the first feature for his Houdini Picture Corporation, The Man From Beyond (1922).

We know almost nothing about Jane Connelly -- who played Felice Strange and her past life incarnation, Felice Norcross -- except that she was born on May 2, 1883 in Port Huron, Michigan, and died on October 25, 1925 in Los Angeles. She only made one other appearance in a film, Sherlock Jr., for which she was uncredited. Even more perplexing is that Connelly was 38 when she was cast in The Man From Beyond, which made her an unlikely starlet in the silent era which saw ingenues as young as 15.

So why after working with established names like Ann Forrest and Lila Lee did Houdini go for a complete unknown? It's possible the budget was limited by his choice of emerging star Nita Naldi to play the vamp in the film. It's also possible Houdini knew Connelly from the past, as she was have said to have performed in Vaudeville with her husband, Erwin Connelly (who played Dr. Gregory Sinclair in the film).

But another, much stranger answer can be found in The Man From Beyond pressbook. In an article titled "Houdini's Perplexing Problem" it says that the production was "confronted with the strange problem that Houdini had to solve in order to engage the proper type of leading woman to support him." It continues:

The story of "The Man from Beyond," dealing with the theory of reincarnation, the psychic type was required for the leading feminine role. Houdini, determined to secure exactly this type, made composite photographs of Paladena and Eva Fay, Mrs. Piper, the Gohlier Girl and Mme. Tomychik, names, all of them, that are familiar in the field of psychic phenomena.

Equipped with this composite photograph, Houdini knew exactly what was needed in the way of type for his leading woman and after a long and exhaustive search through all the available talent among screen leading women, he selected Jane Connelly as being precisely the type required to interpret the role.

So much like the composite photograph was Miss Connelly's own portrait that it seemed as if she had posed for it.


Pretty wild, eh? And while this could just be typical ballyhoo (The Man From Beyond pressbook is filled with references to reincarnation, psychic matters, and even pro-spiritualist remarks), it does explain the unusual choice, and in light of my recent posts about Houdini's apparent belief in reincarnation, maybe he really did cast Connelly for her "psychic" quality.

Or maybe she was just willing to work cheap and didn't mind getting wet. 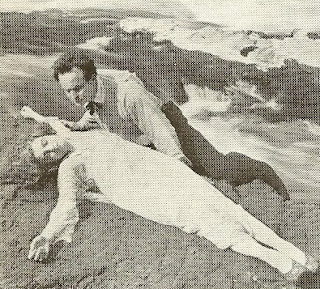 UPDATE: We now know quite a bit more about Jame. Check out Before Beyond.
More Houdini leading ladies:
Written by John Cox at 9:23 AM

Email ThisBlogThis!Share to TwitterShare to FacebookShare to Pinterest
Tags: [History], 1922, Movies, Reincarnation, Series: Leading Ladies, The Man From Beyond (1922)