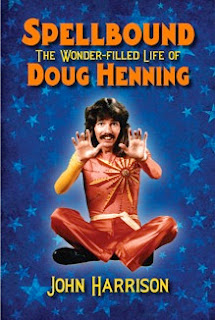 I'm all about Doug Henning this weekend. Not only was yesterday the anniversary of his 3rd NBC special, but I've also I've just finished reading John Harrison's excellent biography, Spellbinder: The Wonder-Filled Life of Doug Henning.

I really think this book is essential reading for anyone interested in magic history. In fact, I'd even go as far to say that it's as important as The Memories of Robert-Houdin in understanding how a single magician advanced the art of magic from one golden age to another. I also applaud Harrison for his amazing research and for telling the story of Henning, who I don't think always gets the credit he deserves. I put Henning right up there with Houdin, Herrmann, and Houdini as one of the seminal figures in magic history. I think that will become more apparent with time.

Anyway, Houdini is mentioned several times in the book, including this intriguing paragraph on page 147 which provides a kernel of info that I don't think has ever been published before. Houdini wore glasses?

Doug wanted to make sure [chief assistant Dale] Soules knew how much he cared for her. While appearing in The Magic Show, Doug met Houdini's niece by marriage, Ruth Kavanaugh, while doing research for a book about Houdini on which he was collaborating with Charlie Reynolds. Kavanaugh took a liking to Doug and, as a gift, presented him with an exquisite pair of Houdini's reading glasses. The sterling silver frame was attached to a little handle with a secret catch. When you pressed the catch, the glasses opened up into a full sized lorgnette. Before leaving The Magic Show, he wrapped the precious spectacles in a small box with a silk bow and gave them to Soules as a gift. She treasured the glasses, but sadly, they were stolen after a performance of her one-woman show, which featured a scene about Doug, The Magic Show, and Houdini's glasses.

The mention of a full sized lorgnette gives me pause. A lorgnette (a long vertical handle for holding the glasses to your eyes) is typically associated with women's glasses of the period. Is it possible these were actually Bess's reading glasses? Or maybe they had come from Houdini's magic collection and had belonged to someone like Adelaide Herrmann?

Nevertheless, it's interesting to think Houdini might have worn reading glasses. I'd love to see a photo of Houdini in his glasses. I'd also love to know where these long lost glasses are today. 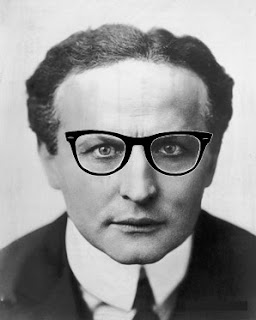 Purchase Spellbinder: The Wonder-Filled Life of Doug Henning by John Harrison on Amazon.
Written by John Cox at 8:17 AM