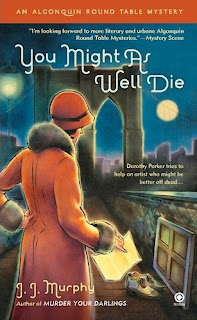 Houdini's fictional career continues in the new book, You Might As Well Die by J.J. Murphy. The book finds Houdini and Dorothy Parker puzzling out a crime with a spiritualist connection in 1920s New York. It is released today in paperback and is the latest in the Algonquin Round Table Mysteries series.

While the author points out in an afterward that the story is entirely fictional, he (she?) does suggest that Houdini and Parker could have met while Houdini was performing his record breaking run at the New York Hippodrome, which sits across the street from the Algonquin Hotel. You Might As Well Die also features Edna Ferber -- who definitely did meet Houdini -- and recently starred alongside Harry in her own fictional murder mystery adventure, Escape Artist.

The next Algonquin Round Table Mystery, A Friendly Game of Murder, will feature Sir Arthur Conan Doyle. A preview of that book in contained in the back of You Might A Well Die.

Purchase from Amazon.com
Written by John Cox at 6:55 AM