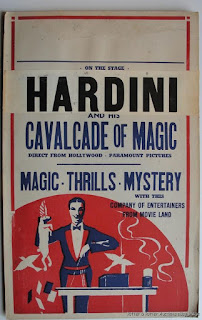 Here's a curious window card from the 1950s for someone calling themselves "HARDINI". This is clearly a fusion of Hardeen and Houdini, but it's a name that I think works much better than the "Nordinis" and "Boudinis" of Houdini's day.

Also note the "Direct from Hollywood - Paramount Pictures" and "Company of Entertainers from Movie Land." What's that all about? I'm also curious about what might be underneath the Hardini name as that is clearly a paste over.

But the real mystery is the man himself. Who was Hardini?

A quick search of Ask Alexander reveals a Hardini from Sweden whose first name is, you guessed it, Harry! But I've also found a few other Hardinis. Jim Sallias, aka Hardini, is active in the 1950s, which puts him in the right frame for this poster. And then there's Cliff Harden, aka Hardini, who is still active today. I've also discovered a "well known" escape artist in the 1930s going by the name Hardini.

The poster is being auctioned on eBay by Potter & Potter. So far it has received no bids.

UPDATE: Looks like Hardini found some love with a last minute bid.
Written by John Cox at 8:48 PM