Ken Silverman at the CJM: "Houdini was the first modern magician." 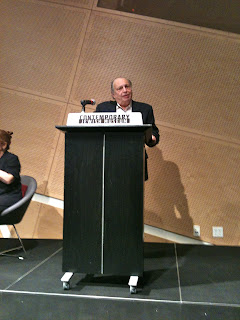 Houdini biographer Kenneth Silverman gave a marvelous lecture at the Contemporary Jewish Museum in San Francisco on Thursday as part of the CJM's Houdini Art and Magic special programming. I was lucky enough to attend the sold out event (those who follow me on Twitter @HoudiniWild got a blow by blow of my trip north). I was also lucky enough to chat with Mr. Silverman before and after the talk, but I'll get to that.

Ken divided his talk into sections spotlighting Houdini's most famous escapes, his magic, his anti-spiritualist crusade, and his involvement with Jewish culture and organizations. He hit on all the highlights that will be familiar to readers of this blog, but there were a few nuggets that were new to me. For example, Ken said that during his research, he consulted with a CIA (lock?) expert who told him there was "no way" Houdini could have picked the Mirror Handcuff. When talking about Houdini's advertising and poster art, Ken mentioned that a "collector in India" recently paid $300,000 for a Houdini poster (a "huge one"). I also liked it when Ken placed Houdini at the dividing line between old and new magic, saying that Houdini really was "the first modern magician."

Interestingly, when Ken was talking about the Shelton pool test, he appeared to break from his script and explained that there was a "theory" that Houdini could have received air via his telephone line. The audience seemed to rise to that and I got the sinking feeling they believed Ken had just revealed the dirty little secret of the test. I had to restrain myself from jumping and explaining that Houdini did the test a second time in Worcester, sans telephone, to show there was no trickery. But I kept myself in check, and it occurred to me that the revelation of the second and third tests might have been news to Silverman himself (not sure it's been discussed outside this blog, if fact). 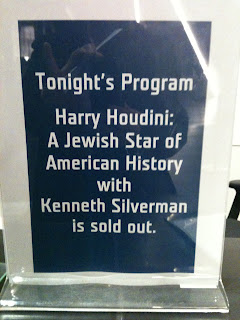 I was especially interested when Ken reached his section about Houdini and Judaism, which is something we really don't hear much about, and this was certainly the place for it! Ken spoke about how Houdini founded the Rabbis’ Sons Theatrical Benevolent Association, whose membership included Al Jolsen and Irvin Berlin, and also the Jewish Theatrical Guild, which counted Eddie Cantor and William Morris among its leaders. Ken also explained how Houdini visited the scene of a Jewish massacre near Kishinev in Russia, which occurred while he was performing in that country in 1903 (the massacre occurred on Houdini's birthday, in fact). This was news to me. Ken also mentioned how Houdini wrote of his encounters with anti-Semitism for journals, and how his diaries give insights into his faith, such as eating at a kosher restaurant with his brother, Nat. Yet Ken pointed out that Houdini also celebrated Christmas, so...go figure.

The Q&A after the talk was lively and yielded some astute questions from the audience. Of course, Ken had to do some mythbusting here, as the first question out of the box was whether Houdini worked as a spy for the U.S. government. "There's nothing to that story," said Ken. He was also highly doubtful that Houdini was murdered. After first stating that he thought the idea was "ridiculous", he tempered his response and said he's just never seen any proof, and that for it to be true, all his doctors would have had to been in on the plot. (I'm with Ken -- it's "ridiculous."). When an audience member asked if Houdini ever did product endorsements (see, good questions!), Ken couldn't recall any off-hand. Again, I had to hold myself back and not shout out, "Zam-buk!" But I remained quiet. I was there to learn from the master. And learn I did. 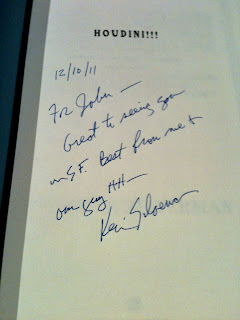 As I said, I was lucky enough to chat with Mr. Silverman before and after the talk. He told me how there is still a lot of Houdini information and material out there that has not yet come to light. One example (also mentioned during his talk) is the voluminous correspondence between Houdini and Harry Kellar that even Ken hasn't examined. Of course, I sung the praises of his biography, Houdini!!! The Career of Ehrich Weiss, which I had brought along and Ken generously signed for me. I mentioned how I'd love to see it reprinted, especially as an eBook so I could more easily search it for research He agreed that he'd like to see it back in print, and seemed somewhat distressed that it wasn't, but he said doing so was "complicated."

Of course, I wasn't going to travel all this way and not take a stroll through the CJM's Houdini Art & Magic exhibition, even though I saw it several times at the Skirball Center here in Los Angeles. I was giving the VIP treatment by the lovely and exquisitely named Gravity Goldberg (who once performed as an assistant to her magician father).

I must say, the CJM has done a wonderful job with the exhibition! They've laid it out in a manner that I actually found superior in some regards to the Skirball, and that's saying something. Of course, they don't have the John Gaughan Water Torture Cell replica. Instead they have the reproduction that was in New York, which is really more of an art piece. However, the CJM does have a terrific photograph of Bessie standing with a pile of Houdini's books that is as tall as she is. This was NOT at the Skirball, nor is it in the Houdini Art and Magic companion book. This photo, which I've never seen, is credited to the Library of Congress, and seems to have only appeared now. Curious. I also loved paging through the exhibition guest book, which contains gems like THIS. 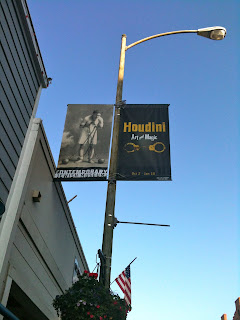 Finally, it's worth noting that San Francisco is festooned with banners advertising Houdini Art and Magic using the CJM's key art of Houdini in shackles. They line Fisherman's Wharf, in fact. (I also discovered a repro Buried Alive poster in a bar called Black Magic near my hotel, where I made several cocktails disappear.)

There's something poetic about all this attention. Houdini's fame really kicked off in San Francisco, which was the first city in his tour of the Orpheum circuit in 1899 after he was discovered by Martin Beck. Now, over 100 years later, it's clear that Houdini is still very much a star in the City By The Bay!

Thanks to Ken Silverman and everyone at the Contemporary Jewish Museum for making this such a memorable event.
Written by John Cox at 8:56 AM