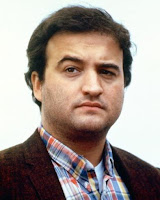 I've just updated my article from last August about the men who almost played Houdini with a new contender; John Belushi.

In 1980 it was reported that Belushi was the favorite to play Houdini in the big screen adaptation of E.L. Doctorow's bestselling novel, Ragtime. It's not known how close Belushi came to getting the part in the Milos Forman directed film (he was starting to branch out into dramatic roles at that point), but Belushi did bare a resemblance to Houdini and his intensity could have been interesting.

However, Houdini's role in the movie would be greatly reduced from what it was in the novel. When the film was released in 1981, Houdini was played by Jeffrey DeMunn in just a few cameo appearances.

Click here to read more about the men who almost played Houdini.
Written by John Cox at 1:00 PM