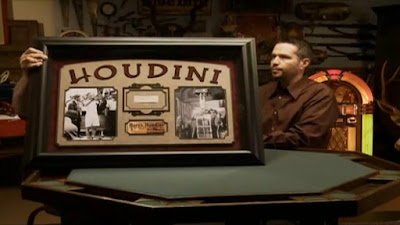 Just a couple of quick TV alerts before I take a break until the new year. First, there will be a repeat of The History Channel's Real Deal that features a Houdini autograph on December 27th at 9:30am. The episode is called "Autograph Anarchy" and first aired December 11. You can also watch the full episode online or buy it on Amazon.

I gotta say, I would not be comfortable authenticating this autograph (below), which the show bought for $1,200. It could be legit, but it looks a little suspicious to my eye. The seller says he bought the autograph in Las Vegas, but has lost the certificate of authenticity. 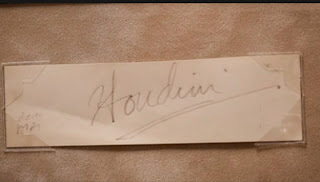 Also watch out for an episode of The Discovery Channel's Oddities featuring what is said to be a Houdini throwing knife. The episode is called "Piece of Mind" and repeats on January 31 at 6:30am.

Houdini had throwing knives? That's a new one to me. I've not seen this episode yet, but I hear the seller does supply a letter of provenance, so I'll be curious to check it out.

UPDATE: Well, the "Houdini" throwing knife on Oddities seemed as sketchy as this autograph. It sold for $1,300.
Written by John Cox at 6:26 PM