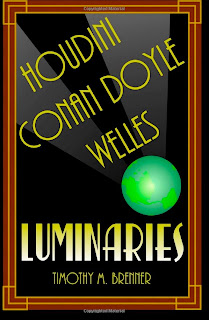 Luminaries by Timothy M. Brenner, which was first published in June, is now available with this slick new cover (left).

Luminaries is an "an alternate history mystery-thriller set in the early 1930's" that finds Houdini, Sir Arthur Conan Doyle, and Orson Welles tracking down a serial killer who murdered a member of the British Royal Family. The three famous protagonists are each gifted with supernatural abilities, with Houdini being "a master of telekinesis".

Author Timothy Brenner tells me that he's currently working on a sequel tentatively titled, Luminaries: Black Dragon. While the first book is told mostly from Sir Arthur Conan Doyle's point of view, Book 2 will be told from Houdini's viewpoint.

Luminaries is available as a paperback and Kindle eBook from Amazon.com.
Written by John Cox at 4:06 PM