I've yet to visit the Houdini Museum in Scranton, PA, but when I do I will be especially eager to take a look at these highly personal pieces of Houdiniana. These two portraits of Houdini's father and mother hug inside 278 during Houdini's lifetime. Yes, these were the pictures he lived with everyday, complete with the original gilded frames. 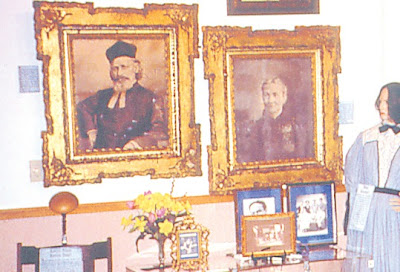 When you think about it, these two portraits probably meant more to Houdini than any of his escape apparatus or magic props. Curators Dick Brookz and Dorothy Dietrich acquired these in the now legendary 1980 auction of items from 278, which I've dubbed, The greatest Houdini auction ever.

Hey, forget about bringing a pair of handcuffs to the next seance table. I say bring these portraits! Maybe that's how we'll finally coax Harry back from the great Hippodrome in the sky.

Speaking of the Houdini Museum, Dorothy Dietrich -- who is now sporting the moniker "The Female Houdini™" -- received a nice name-check in a recent episode of House. You can check out the clip on YouTube (until it gets pulled). Dorothy has also just completed a new interview for The History Channel's Decoded that promises to reveal "some interesting facts" about the infamous dressing room punch. That is set to air in January.

Thanks as always to the gang at the Houdini Museum for keeping me up-to-date on all their Houdini related activities.
Written by John Cox at 11:05 AM