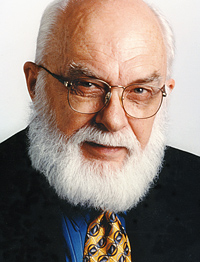 The Contemporary Jewish Museum have announced one more special event as part of their Houdini Art and Magic programing. This time the legendary James Randi will be joining a special "Houdini tribute edition" of San Francisco's popular Porchlight storytelling series. Here are the details:

In related news, James Randi will return to The Magic Castle on Monday, January 16, 8pm to 11pm, for the second part of his interview with Max Maven. Randi last appeared to a standing room only crowd at the Castle back in September 2010. The interview is a "Castle Perk" open to AMA members.
Written by John Cox at 6:33 PM