Here's why Houdini Himself is offline 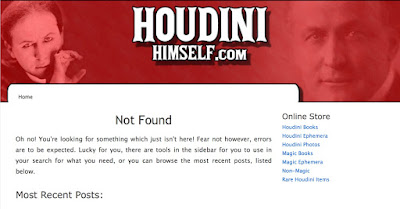 Kevin launched Houdini Himself in May 2010 and used his blog to share rare one-of-kind Houdini images from his collection. In 2012, The Mandala recognized it as one of three "game changer" Houdini blogs. But Kevin found his images were continually lifted and used without permission, and even sold on eBay. Kevin finally gave up the fight to control his images and folded the blog last month.

I understand Kevin's decision. While image reuse can be accidental (I've done it myself), there are image pirates who seek out high resolution images, remove the watermarks, and sell them on eBay as "original reprints." Some even reproduce the images on t-shits and mugs.

One way to protect against image theft is to drop the resolution of any image to 72 dpi. The images will still look great online, but will not print well. Never put a 300 dpi image online or thieves will grab it, if for no other reason than it's the desired dpi for printed reproduction. It's also good to never buy a questionably sourced Houdini image on eBay, or any ephemera sporting Houdini imagery that isn't from a known or trusted source.

Unfortunately, with Houdini Himself now down, the many links I've shared here are now dead, including a link to Kevin's important 2012 post about how Houdini might have been considering a monkey gland transplant.

But it was a treat to have a look inside one of the world's great Houdini collections, if only for a short time.