Here's a fantastic unpublished photograph from the collection of Jon Oliver -- the man who sleeps in Houdini's bed and also holds Bessie's hair -- of Houdini being tied to a stake by what appear to be two Indian braves in traditional feathered headdresses. 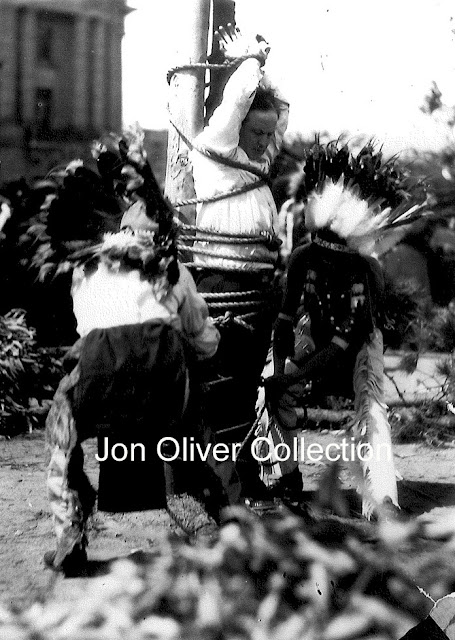 This is almost certainly the infamous burning stake challenge that went wrong for Houdini. The terrain and Houdini's clothes appear to match the one published photo from that event. However, accounts say that was a challenge issued by the Boy Scouts of America and nothing about the involvement of Native Americans. But photos don't lie.

This was one of the unpublished photos I shared during my presentation at the 2012 Official Houdini Seance (although this one went by a little quick). I think this is a quintessential photo of Houdini being challenged, and I'm thrilled to be able to share it here now.

UPDATE: This newspaper clipping from the Des Moines Register Nov. 23, 1924 shows that this migt have been an entirely different "bonfire" challenge than the Boy Scout challenge, which the caption says occurred in San Francisco.