Houdini on Magic gets a cover revamp (update) 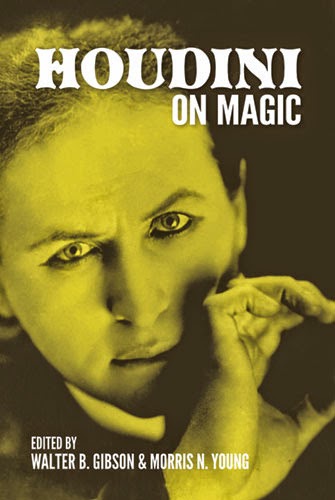 Dover's perennial trade paperback edition of Houdini on Magic by Walter B. Gibson and Morris N. Young has received a minor cover art makeover. The new cover pictured on Amazon and the Dover website shows a new title font treatment, and the resolution on the photo of Houdini looks improved as well. (Yes, this is the kind of thing I get excited about.)

Houdini on Magic was first published by Dover in 1953 and has never gone out of print. Click here for a retrospective on the book and the changes in cover art over the years.

Dover's The Secrets of Houdini has also received a new title treatment on the book's spine. Watch for a retrospective on that title coming in the new year.

UPDATE: According to the publisher, "the cover is new, but the new covers will not be shipping for a few months because of our inventory of the old covers."
Written by John Cox at 6:42 PM