Doug Henning walked through his brick wall 35 years ago today 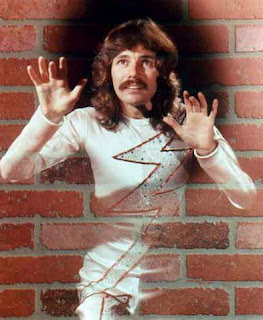 It was 35 years today ago on December 15, 1977, that NBC aired Doug Henning's third live "World of Magic" television special. Having performed the Chinese Water Torture Cell and Vanishing Elephant on his first two specials, Henning once again built his show around a Houdini classic -- Walking Through A Brick Wall.

In the superb book, Spellbound: The Wonder-Filled Life of Doug Henning, author John Harrison says the idea for doing Houdini's Walking Through A Brick Wall came to Doug while meditating. The book also reveals Henning's method (essentially the same method Houdini used, although with added complexities), and says that a mistake happened during the live broadcast. While the half-second timing error was most likely missed by general audiences, magicians who knew where to look could catch it.

NBC originally wanted Houdini himself, Tony Curtis, to guest host the third special (Bill Cosby and Michael Landon had been the hosts of specials I and II). But Curtis' lawyer demanded four times the highest salary ever paid for a guest host. NBC offered to pay double, but when that was refused, they went with Glen Campbell as host instead.

While maybe not the "event" of the original special, Doug Henning's third special was as successful as his first two. Show-stealer's this time were Henning's opening motorcycle vanish and his "Magic of Childhood" segment with co-host Sandy Duncan.


December 1977 also saw the release of Doug Henning's book, Houdini His Legend and His Magic, written with Charles Reynolds (I received it for Christmas that year). The coffee table sized book is filled with rare photos, including Houdini and Bessie's entire personal photo album, which has been given to Doug by Houdini's niece, Ruth Kavanaugh. (Click here for the story of another Henning-Kavanaugh artifact).

For his fourth Live special on December 14, 1978, Henning would not do a Houdini inspired illusion. Instead he created an original escape effect from a cage of tigers. "Henning is chained. The Tigers aren't!" read the ad in TV Guide. However, the fourth special was considered creatively inferior to the others (along with suffering a major on-stage gaff and backstage misfortune when the tigers got loose), and Henning would forgo live specials in favor of taped shows from that point on.