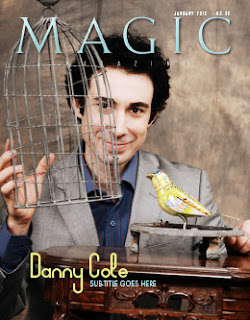 Here's a nice way to kick off 2013. Chris Philpott, who penned a report in the December issue of MAGIC about the recent screening of Houdini's movies in Hollywood, is back with another article in the January 2013 issue called, "Taking Another Look at Houdini’s Movies". Here's a tease:

Houdini’s movies are a fascinating but neglected part of his legacy. The conventional wisdom about these movies is that the stories were just excuses for his escapes and that he was a very weak actor. Story-wise, why is it a problem that the films are excuses for escapes? We don’t complain that action movies are just excuses for action scenes. The question is, are they a good excuse? A film like The Dark Knight is. Unfortunately, most of Houdini’s movies are not. As for Houdini’s acting, yes, it’s awful in spots, but most of it is fairly good and there are moments of emotional honesty, power, and charisma that hint that maybe, if things had gone a little differently, Houdini might have become a real movie star.


The 6-page article includes images from my collection as well as the collection of Arthur Moses. I don't have the issue in hand yet so I haven't given the article a read, but I'm pretty sure Chris Philpott is my new BFF.

This issue also includes a look at the new play, Harry the Great, an original production by the Creede Repertory Theatre in Colorado. The play features adventures at the 1893 World's Fair involving Florenz Ziegfeld Jr, Harry Robenstein, and a young "interloper" named Erik Weisz (their spelling).

The January issue of MAGIC is available now from the official MAGIC Magazine website.
Written by John Cox at 9:19 AM

Email ThisBlogThis!Share to TwitterShare to FacebookShare to Pinterest
Tags: Arthur Moses, Fictional adventures, Haldane of the Secret Service (1923), Magazines, Movies, Plays, Terror Island (1920), The Grim Game (1919), The Man From Beyond (1922), The Master Mystery (1918)