Last night's finale of The Amazing Race Season 21 featured a Houdini-themed "Roadblock". It started with teams arriving in New York where they had to find a clue hidden in a Houdini poster in Coney Island. (My favorite part here was watching tourists in the background taking pictures of the poster as the teams struggled to find it. One woman kissed it). 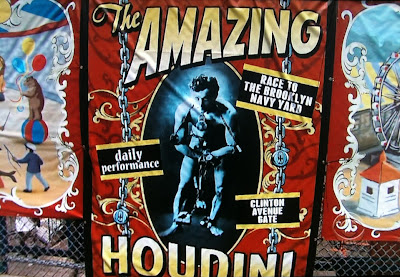 After finding the poster and seeing that it directed them to the Brooklyn Navy Yard, teams raced on and we learned from host Phil Keoghan what their challenge would be. Below is clip of the Roadblock set-up, complete with Houdini footage. I recorded this on my phone, so volume is a little low.

And, yes, the girl says she doesn't know who Houdini is -- my nightmare.


Top escape engineers Mark and Sheila Cannon consulted on the show and also appeared on camera helping rig each contestant. Each of the three competitors were able to escape their straitjackets and raced on.

I won’t tell you who won the $1 million (highlight spoiler: but at least they knew who Houdini was).
Written by John Cox at 7:26 AM