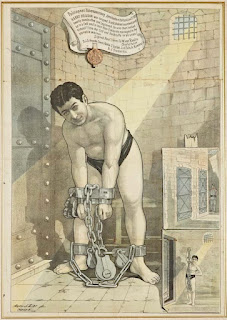 Four original Houdini posters will be auctioned by Guernsey's auction house in Manhattan on Sunday. The posters are a part of a remarkable collection of nearly 60 magic posters from the collection of Alan J. Kanter.

The auction also includes posters for Kellar, Thurston, Dante, and Chung Ling Soo among others.

According to an article in today's New York Times, Kanter, 65, spent decades trying to develop a museum, theater and hotel with a magic theme, where he could display his collection. He considered sites in New York and Los Angeles, but could find no major backers. He's selling the posters now partly because of health problems.

The Kanter Magic Poster Collection sale is set for 10AM on Sunday, December 9, at Arader Galleries, 1016 Madison Avenue at 78th, New York, NY 10021. You can view all the lots and bid online at LIVE Auctions.

UPDATE: Two of four Houdini posters sell in NYC auction.
Written by John Cox at 11:32 AM