Penn Jillette: "Houdini was not a magician. Houdini was a superstar." 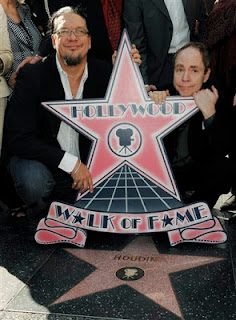 I enjoy listening to Penn Jillette talk (and talk), and when the topic turns to Houdini, well, that's as good as it gets!

And that's what happens in this terrific interview on KNPR, Nevada Public Radio. Penn is promoting his new book, Every Day Is An Atheist Holiday (which apparently includes a fair amount on Houdini). The Houdini/magic discussion starts at 29:15. Here's a taste:

"We look back on the 20th Century in 100 years, and look at entertainment, the only two people in the running for being remembered in the 20th Century are Elvis Presley and Houdini. And as time goes on, Houdini's winning."


Penn goes onto to say Houdini's fame and evolution of his art is comparable only to "maybe sorta" Bob Dylan and Picasso.

Check out the full interview at KNPR.

Penn Jillette's Every Day Is An Atheist Holiday can be purchased on Amazon. Penn also has a Podcast, Penn's Sunday School, where you can listen to an especially good interview with James Randi.
Written by John Cox at 11:31 AM