The Doctor meets Houdini (at last!) 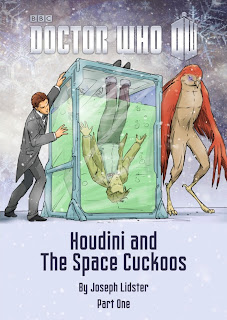 While Houdini has been name-checked several times on the popular BBC series, Doctor Who, it's hard to believe that in 50 years of time travel adventures in books, film, radio and television, that we've never seen The Doctor encounter Houdini in person.

But that has finally changed with the release of the first official Doctor Who-Houdini mash-up adventure! "Houdini and The Space Cuckoos" is a short story by Joseph Lidster and is available online at the BBC One website.

Here's how the idea for a Who-dini story came about:

"Earlier this year we asked who you would like to see the Doctor meet in a future adventure. We were delighted by the huge number of responses and the enormous breadth of your suggestions.

The most popular ‘nominees’ ranged from Florence Nightingale to Nikola Tesla with writers, scientists and soldiers all having their champions. We were forced to discount characters who were fictional, so Sherlock Holmes and Doctor Watson had to be left in Baker Street and similarly, people we’ve already seen the Doctor encounter were eliminated, which meant figures like Shakespeare were barred.

In the end, Doctor Who’s Executive Producer Caro Skinner sifted through the most popular suggestions and picked the person from history whom the Time Lord would meet in our seasonal short story… It’s the master escapologist, Harry Houdini!"


You can download a PDF of "Houdini and The Space Cuckoos" from the Doctor Who Adventure Calendar 2012:


A complete list of Doctor Who-Houdini references can be found at TARDIS Index File.

UPDATE: Check it out. This post made it (temporarily) onto the main page of the official Doctor Who website. 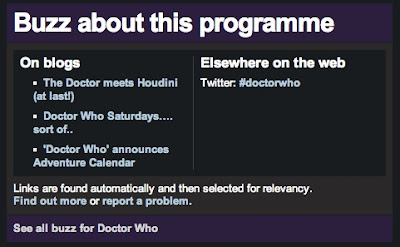