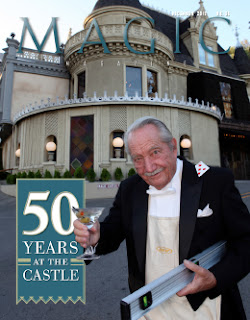 I just wanted to give a shout-out to the December issue of MAGIC as there are three Houdini-related reasons to grab this issue. First, there's a nice full page ad for the Alan J. Kanter poster auction featuring the beautiful Amsterdam jail escape poster. Then there's a very good report by Chris Philpott on the screening of The Man From Beyond and Terror Island in Hollywood in October. Finally, there's a nice report on the Official Houdini Seance in Fort Worth. Yes, I covered all three here at WAH, but here's a chance to have a hard copy record complete with some nice photos.

But you'll also want to get this issue for the first part of what will be a year long celebration of The Magic Castle's 50th Anniversary by Milt Larsen. This issue includes a terrific article about the renovation of the Lane Mansion in advance of its grand opening as "The Magic Castle" in January 1963.

You can buy the December issue of MAGIC from the official MAGIC website.
Written by John Cox at 6:17 PM