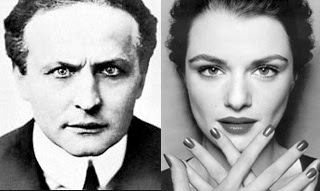 Yesterday it was announced that Rachel Weisz has been nominated for a Best Actress Golden Globe for her performance in The Deep Blue Sea. Not only did I develop a mad crush on Rachel after The Mummy (Universal horror being a side passion of mine), not only is she married to 007/Daniel Craig himself (my other blog: The Book Bond), but there is also the Houdini thing.

Several articles across the web say that Rachel "idolizes" Houdini. There is also the possibility that they are related (the Weiss family was "Weisz" back in Hungary). I first heard this back in 2005 when Rachel was originally tapped to play Mary McGarvie in Death Defying Acts (the part ultimately went to Catherine Zeta-Jones). But now I've found what purports to be a direct quote from her thanks to Rachel Weisz Paradise:

"He could bust out of any jail, out of any lock, out of any situation. He was a very early poster boy using S&M as part of his appearance and a greased body, wearing little underwear. Also he’s Hungarian and his surname was Weiss, so my fantasy has been that he’s a long lost cousin."


Congratulations to Rachel Weisz on her Golden Globe nomination (a traditional Oscar indicator). She will next appear as Evanora in Oz: The Great and Powerful, featuring James Franco as a magician.