History has a script for their Houdini miniseries (update) 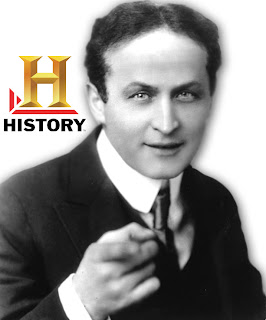 Last week it was reported that The History Channel (which I guess is now just "History") is developing a miniseries about Houdini with Adrien Brody set to star. Today I can report that the project is further along than just "development" (which can mean anything).

I've learned that the network already has a finished script by a major writer. I'm not at liberty to reveal the name of the writer, but know that he has vast experience with books, television, and movies, and also has an interesting connection to Houdini.

Why am I bringing this up if I can't spill the name of the writer? Because news that History has a script and a major star (and momentum coming off The Bible) makes me think that of all the Houdini projects swirling around Hollywood at the moment, this one actually has a chance of being made, and maybe sooner than later. This is good news because, according to reports, this is the only project taking a biopic approach to the Houdini story. (Although we shouldn't kid ourselves that it won't still have a heavy dose of fiction -- that's just the nature of the beast.)

It's also possible that this fast track History project could unstick one of the other Houdini projects and we'll actually get more than Houdini movie project in the coming year.

UPDATE (8/17/13): Okay, so I decided to spill the name of the writer in my post about the various Houdini projects in development in Hollywood. It's Nicholas Meyer, writer director of Star Trek II: The Wrath of Kahn, author of the best post-Doyle Sherlock Holmes novel (IMO), The Seven Per Cent Solution, and the man who directed a television miniseries event in the 1980s with The Day After. And what's Meyer's connection to Houdini? His father, Bernard C. Meyer, wrote the 1976 psychoanalytical portrait, Houdini: A Mind in Chains.