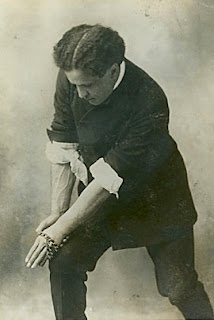 In 1903 Houdini traveled to Russia. It would be the first and only time he performed in the country. Much has been made of the fact that Houdini could or would even want to travel into Czarist Russia at the peak of his European fame. Certainly this is irrefutable evidence that Houdini was a spy!!!!

But Houdini's column for the Dramatic Mirror clearly shows that Russian Music Halls were booming along with the rest of Europe, and there were a great many American and European acts flowing into Russia at the time. As to the fact that Jews could not perform or even sleep in Moscow and St. Petersburg, Houdini himself provides the explanation for how he and his fellow performers got around this anti-Semitic edict:

Hebrews are not allowed at all into Russia, but this is easily overcome by simply denying your religion when you are having your passport vised by the Russian consul, or you can go into Russian with a license, like a dog.

Anyway, with visa in hand and audiences waiting, the task was getting into the country, which Houdini discovered was a magic trick in itself. In a column headlined "Houdini in Russia" dated April 23, 1903, the Handcuff King writes:

The above is the Russian date, but it is May 5 in other countries. We left Berlin, and taking the "Courier" train, we were soon speeding on our way to Russia. We arrived in good time at the frontier, Alexandrowo, and the merry revenue inspectors were soon looking at the odds and ends as well as other things that we had in our trunk. Such an inspection! No detective ever looked for a clue with greater zeal, no Sherlock Holmes ever tried to find a needle in a hay stack as these official searchers did. They stop you first to take away your passport; then calmly proceed to ransack your baggage. All my reading material was taken away and my desk-trunk was to have stopped there until everything was read through by the censor, but I shipped it back to Berlin. [...] As I carry a lot of burglar tools in my baggage, I had to obtain permission from the Russian Ministerium to take them into Russia, and I think they would have sent me back to Germany had it not been that I carried a permit to take in the tools. Eventually the inspection came to an end, and once again we were on our way to Moscow.


Houdini's Russian tour was very eventful. He performed for the Grand Duke in Moscow and made a spectacular escape from a Siberian Transport Prison Van. These exploits have be told in the many Houdini biographies, so no need for me to go into them here. In fact, Houdini himself doesn't write that much about his Russian triumphs, but on June 22 ("Russian Date") he does offer up an untold story of how he and Bess celebrated the most American of holidays:

Although yesterday was the Fourth of July in American, it is only June 21 here in Russia, but just the same our American Consul, Smith, invited all the American performers who were in Moscow to a celebration on the grounds of the consulate, over which waved a large American flag, while the Russians looked over the fence and wondered what the "always-in-a-hurry Americans" were up to. Among the guests were the Manhattan Quartette, Smith and Doretto, Weston of loop the hoopology, four of the Florida Girls, Miss Walcott, Mrs. Harry Houdini and myself. There were many speeches, but not a single firecracker or report of a gun was heard, and without these it did not seem at all like the Glorious Fourth to me. 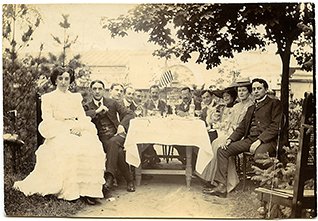 Houdini's fellow celebrators that day, the Florida Girls, who did a popular dance called a cake-walk (performed by Bess herself early in her career), later ran afoul of the Russian police. Houdini writes:

Every theater is under the power of the police. Nothing can be said or done against their wishes, and if they wish to stop any performance, why they stop it, and that is all that there is to it. For instance, the Seven Florida Creole Girls do a cake-walk. The police saw their first performance and allowed them to go on. Now, after their tenth performance, the police have stopped them, saying that the American cake-walk is too suggestive. As I saw the act, I can honestly say that it is not one-tenth as suggestive as some of the can-can dancers I have seen on the same stage. But then I am not the Russian police; I am simply the man that escaped out of their Siberian "transport-cell," greatly to their astonishment.