Guest review: Nothing on Earth (Can Hold Houdini)

Today I'm pleased to offer this terrific Guest Review by our friends Dorothy Dietrich and Dick Brookz of the Houdini Museum in Scranton of Axis Theatre Company's new production, Nothing on Earth (Can Hold Houdini). 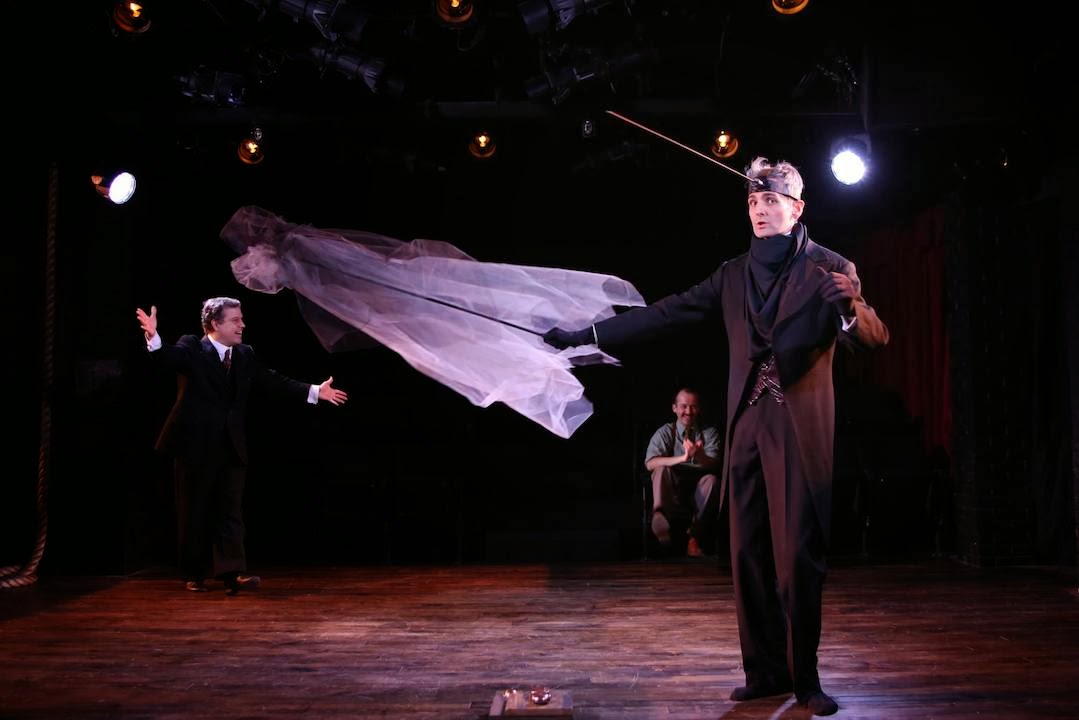 Axis Theatre Company continues to explore magic and illusion with the premiere of Nothing on Earth. The play is directed by the author, and the Artistic Director of Axis, Ms. Randy Sharp. Randy Sharp wrote and directed the company's Drama Desk-nominated production of Last Man Club, and directed Edgar Oliver's acclaimed East 10th Street.

First let us say, we can never get enough of Houdini. If you are a fan of Houdini, and “who isn’t?”, this is a play to see. Having a show about Houdini, in New York City, one of the worlds centers for theater is a very exciting event.

Nothing on Earth mostly concerns what happens when we leave the earth. The play is based in part on facts in the life of Houdini and Sir Arthur Conan Doyle. Unlike many theatrical and film portraits of Houdini, it tries to be as accurate to what really happened as possible, within the confines of a play. 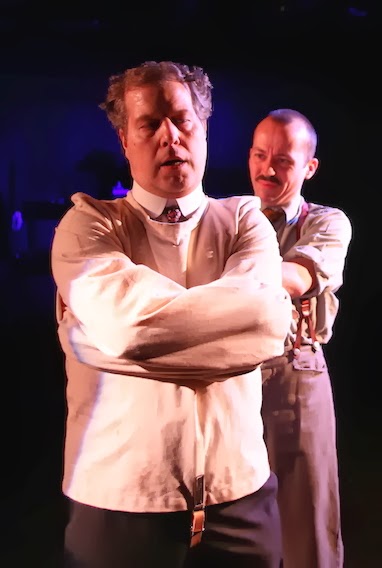 Nothing on Earth tells about Houdini's crusade against crooked mediums which was, for Houdini, all mediums. * It was Houdini’s wish to be considered an intellectual, an author and a leading thinker of his time, for that matter all time. such was the ego of the Great Houdini, rightly so or not. It was natural that Houdini would attach himself to the eras very famous “Sherlock Holmes” author Sir Arthur Conan Doyle, who was at the other side of the spectrum, being a blind believer in the occult, mediums and spiritualism. Doyle's’ loss of several close members of his family, which is pointed out in the play, drove him to blindly believe that through mediums, through his mediumistic wife, and even through himself, he could contact the dead. It was inevitable that Houdini would bump heads and cross paths with Sir Arthur Conan Doyle. The controversy would destroy their friendship, Yet to their deaths in some way they had great respect for each other.

Two excellent scenes take place early in the play. The show opens in complete darkness. The dark void is soon filled with eerie manifestations, noises, a ball floats through the air, and a ghostly figure roams the stage. Suddenly the lights are turned on and we see Houdini (George Demas) holding a ghostly figure, who turns out to be medium Bradley Grimshaw (Brian Linden) in disguise with the various paraphernalia that he had been using to create the effects in the dark. It is a dramatic beginning and it sets up Houdini and his assistant Jim Collins (David Crabb), as the enemies of those who prey on the grief of those who’s relatives who have passed on. The foiled medium insists he is a good person helping those who are bereaved. But he is also helping them out their money and giving them false hope in the process. It would have helped to have Jim Collins in some kind of assistants costume to help define his character as the play progressed.

The play introduces us to Houdini who quickly establishes himself as a master of escape as he escapes from handcuffs and chains on stage, and then a strait jacket to a very good audience reception. The escaping from shackles, would have been slightly more elegant had he been provided with the little ghost cabinet Houdini used, especially since the theater is set in the round, rather than have him lie on the floor, but that may be a bit of nit picking on our part, since it did go over very well. 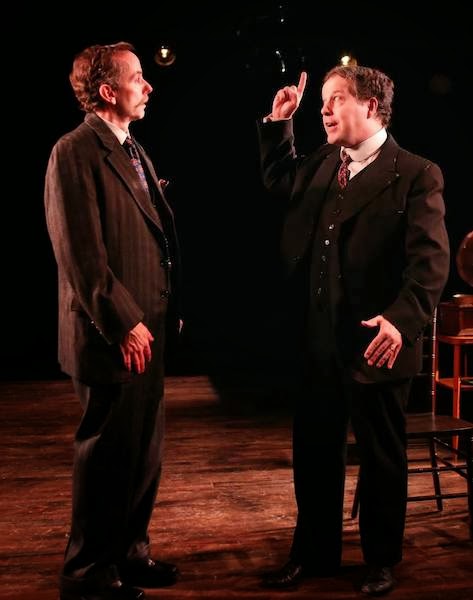 Much of the action of the show revolves around Sir Arthur Conan Doyle (Spencer Aste), a blind believer in spiritualism; Houdini as spiritualism's arch enemy; Mina Crandon (Lynn Mancinelli ), comparatively most often forgotten, who was one of the most famous, beautiful, defiant and controversial mediums of the day. She was also known by the name Margery, and Dr Crandon, (Brian Barnhart) husband, enabler, promoter and puppeteer of Margery .

The two most clearly defined and exciting characters in the play are Houdini and Margery. Houdini being the toughest to play. How does one get an actor to portray Houdini, an icon among icons? Houdini, no doubt a dynamic entertainer, in peoples minds is so much bigger and grander than real life. For us the actor could have been a bit more seductive. In studying Houdini, one of his most important characteristics, along with a vibrant outgoing personality on stage, was his dynamism and sexuality as a performer. Non the less the actor did stand out in all the scenes he appeared in. It helped knowing a bit of the history of the story to follow the play. It would have helped to use just one name for each character as they were referred to as the story progressed, rather than first name, then last name, then nick name, etc.

Margery is portrayed excellently by Lynn Mancinelli as an attractive medium who’s uses her sexuality to help win over her sitters, including Doyle, though he needs no additional coaxing. Gullible bombastic Doyle accuses Houdini at one point of being a medium himself and insists that some of his escapes are done because Houdini himself was a medium with supernatural powers. Houdini insisted that his stunts were just tricks.

Midway we are introduced to an excellent recreation of the “Margery” Box. Houdini created the cabinet in real life to contain Margery to prevent her from doing any sort of manifestations in the dark. It is worth the price of admission to see the excellent recreation of this prop and its use. Margery slyly accuses Houdini, as she enters the box, of planting some items within the box to discredit her. We do get the sense that she herself wryly put the items there to embarrass and discredit Houdini. It was subtly well done. 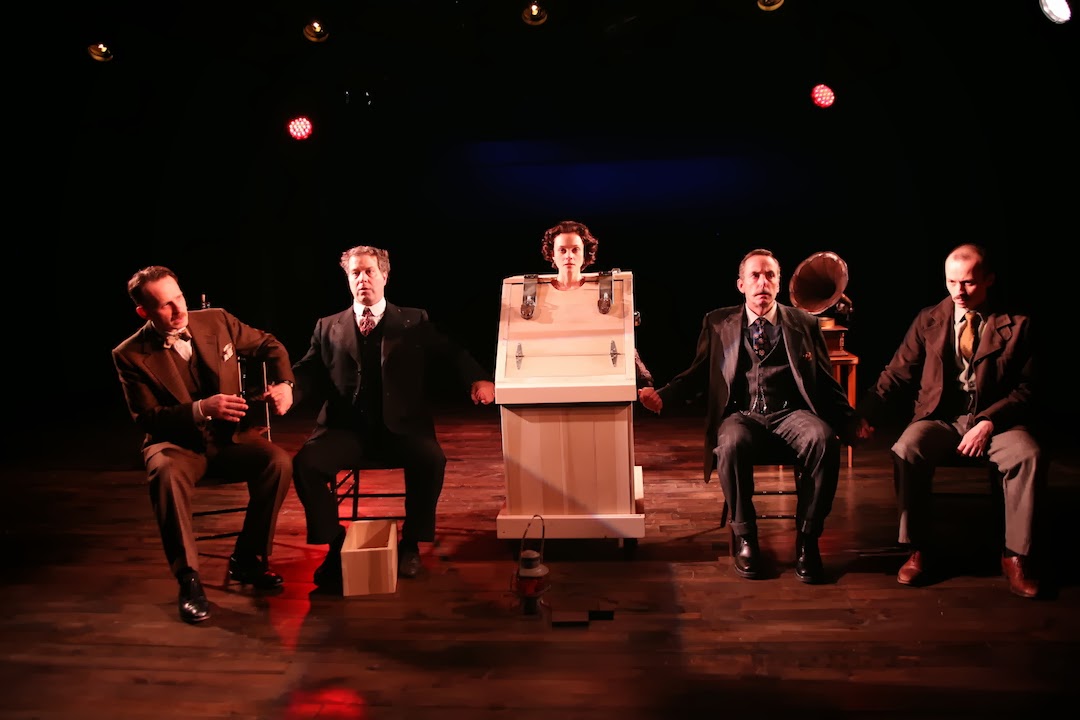 Happily the show is not centered about Houdini’s need to contact his mother. It is not so, as many claim, that Houdini sought out mediums to contact his mother and then became disillusioned. Houdini realized as a teenager that mediums were fake. He had read “Revelations Of A Spirit Medium” and other works debunking mediums. He even early on did a fake spiritualistic act that he found to be a low point in his life, when he was struggling. Houdini’s mother died in 1913, and Houdini did not rage against spiritualism until the 1920’s, after the end of the first World War, when spiritualism hit its heights due to the many deaths of family members in the war, including in the family of Sir Arthur Conan Doyle.

The play poses the question, which it leaves for the audience to determine, “Is Margery real?” Or, is she just using spiritualism, as many women did, to gain a voice in a time of little recognition for women. She speaks to Houdini in Hungarian! She seems to use the code Houdini had set up! (This never happened in real life.) Can she really reach the other side?

If you like Houdini, and who doesn't, this is a show not to be missed. Just seeing the long lost “Margery” box recreated is worth the price of admission for any Houdini fan.

Let us hope we see more Houdini in theater and the movies.

Nothing on Earth runs at Axis Theatre from February 27-April 5. Axis Theatre is located at One Sheridan Square in the West Village (just off 7th Avenue, accessible from the #1 train at Christopher Street and the B/D/F/M/A/C/E at West 4th Street). Click here for more details and to buy tickets.

Axis Company has worked closely with William Kalush, Executive Director of the Conjuring Arts Research Center, Houdini scholar, and author of the best selling book, The Secret Life of Houdini. The Conjuring Arts Research Center is a not-for-profit organization dedicated to the preservation and interpretation of magic and its allied arts, which include psychic phenomenon, hypnosis, deceptive gambling, mentalism, ventriloquism, juggling, and sleight-of-hand techniques. 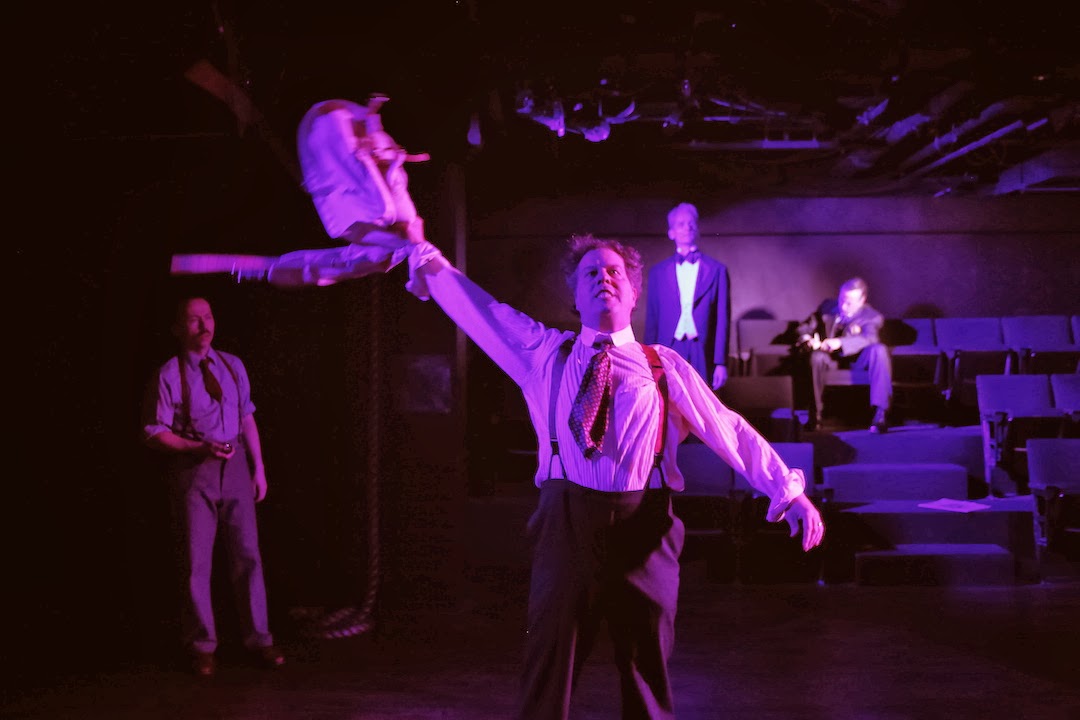 Thanks to Dorothy Dietrich and Dick Brookz for covering this for WILD ABOUT HARRY. All photos by Dixie Sheridan.
Written by John Cox at 10:40 AM