Houdini might have been an S.A.M. man, but next month he's headed to the IBM when I bring my "Houdini in Hollywood" talk to IBM Ring 96 in Seal Beach, CA. The talk will take place during their regular monthly meeting on August 15, 2015 at 7pm. It's open to the public and admission is FREE.

This will be a "Houdini in Hollywood" mega lecture (with intermission) and will include all the clips that I've only selectively shared at previous talks. Also, thanks to our friends at Park Circus, I will be showing 10 minutes of select footage from TCM's newly restored The Grim Game!

Ring 96 was chartered in 1949 and serves IBM members in the Seal Beach/Long Beach area with lectures, competitions and other magic based events. (One of their past presidents was George Boston, who served as technical advisor on the Tony Curtis Houdini.) Ring 96 has hosted some impressive speakers, so I'm very honored to have been invited to speak at their meeting. 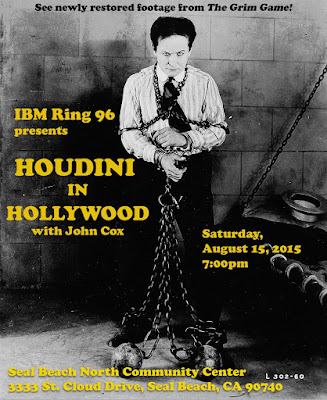