The Grim Game screens at the S.A.M national convention 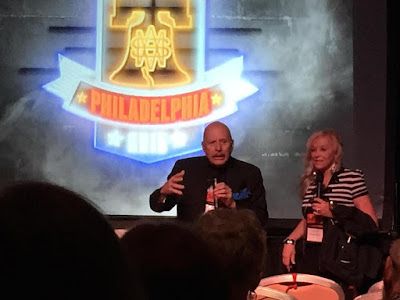 TCM's restoration of Houdini's The Grim Game screened today at the Society of American Magicians National Convention in Philadelphia. Dorothy Dietrich and Dick Brookz of the Houdini Museum introduced the movie and participated in a Q&A. Dorothy was recently elected president of her local S.A.M chapter in Scranton, PA.

This is actually the second time the S.A.M has screened the film. They screened it in 1919 when Houdini was into his third year as National President, and at that screening Howard Thurston gave a speech calling it "Houdini's best work." Houdini would serve as president of the S.A.M. until his death in 1926.

There have been some enthusiastic tweets coming out of the S.A.M. convention (#sammagic). I especially like this one from @KaylaDrescher:

This was the fifth screening of Houdini's long lost silent film. It will screen next at the Stateside Paramount Theatre in Austin, Texas on July 19. It will also show on TCM this year, but no air-date has yet been announced.

UPDATE: Listen to the S.A.M. "Backstage" podcast: The Grim Game of finding Houdini.