Appleton's new Houdini Plaza bust was revealed on Monument Guys Saturday night. Commissioned by Tom Boldt and the City of Appleton, the bust was created by artist Craig Campbell. As you can see from the pics below, it's a stunner! 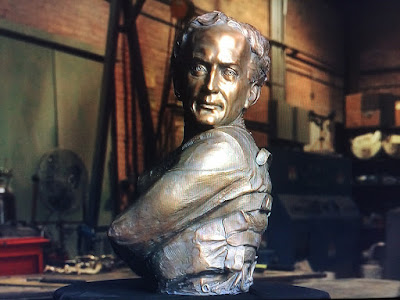 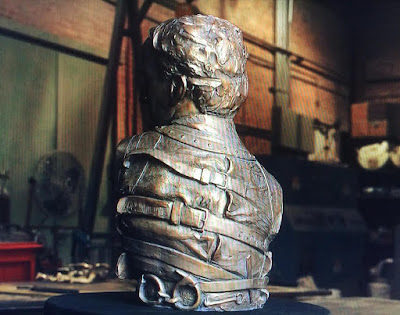 The episode showcased the planning and creation of the 125 pound silicon bronze bust. For research, Craig Campbell visited Appleton's Museum at the Castle and was shown into their special Houdini vault. There the museum has a collection keys and lock-picks from Houdini's famous trunk No. 8. Campbell incorporated several of these into the sculpture, including a bobby pin hidden in Houdini's hair and a key that pulls out from behind his ear.

The Houdini bust will officially be unveiled during the Houdini Club of Wisconsin's annual convention in Appleton, August 27-29 .

You can watch the entire episode ("Metal of Honor") at the Monument Guys website.