Today we get our first look at actors Michael Weston and Stephen Mangan in character as Houdini & Doyle. The pic below was taken as the production filmed scenes on Back Piccadilly in Manchester and shared on Twitter by Derek Heath @monkeyboydez. 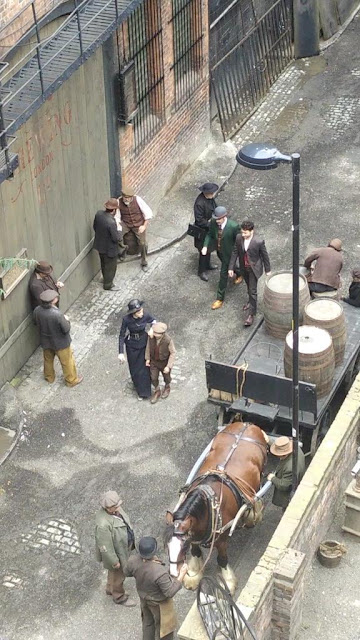 In this pic, Mangan/Doyle is the grey bowler hat and Weston/Houdini is beside him. It appears Weston has an unshaven face, so it looks like his Houdini will sport a contemporary look. In fact, both characters appear to have very distinctive "looks."

The Chester Chronicle captured a closer photo of Mangan as Conan Doyle during a shoot yesterday in Chester. The paper reports:

The Chronicle spotted Mangan in the alleyway alongside Alexander’s Jazz Theatre Bar, complete with fake moustache, smart chequered waist coat and green trousers, waiting for his next scene.

An empty house had been commandeered overlooking the Dean’s Field which was blacked out from the exterior. TV trucks were parked up around the back of Bollicini’s restaurant.

The crew, who are filming in other northern cities including Manchester, were only here on Monday (July 20) but are expected to back in Chester at the end of the month. 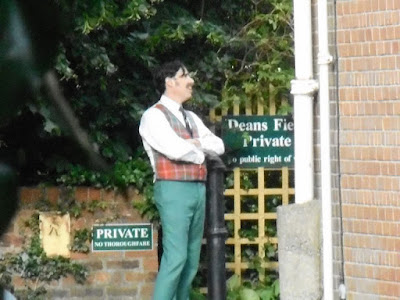 Thanks to Derek Heath for allowing me to share his pic.

UPDATE: Looks like Weston will be clean shaven after all. Better shots from this same shoot here: Daily Mail captures Houdini & Doyle.