"I don't drink, smoke or chew"

Last month I saw the Houdini miniseries receive an IIG Award at the Los Angeles Center For Inquiry. During the reception, I was excited to discover that the CFI has several framed letters on display from Houdini's early career. These are copies of originals from a rare document collection in Santa Barbara, and are letters that I've never seen before.

The letter below I found especially interesting. It appears to be the second page of letter in which the young Houdini pitches himself for work.


There's a lot to love here. It's a really interesting mix of bravado and humility. First off, notice that the stationary says "6th Annual Tour - 1890 to 1896." The Houdinis act began with their marriage in 1894, only two years earlier. Possibly Houdini is including his own first appearances on stage, which were around 1890. But this shows just how important it was at the time to be perceived as a "seasoned" act. 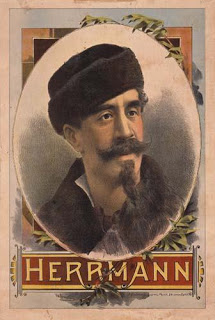 I'm also intrigued by the claim that "Herrmann the Great stole the idea for our act from us and he featured it." Alexander Herrmann was by far the most famous magician of the day (and was also indirectly related to Houdini). It's hard to know exactly what "act" Houdini is referring to here. The obvious candidate would be Metamorphosis. But while Herrmann did substitution illusions such as Indian Mail, Asiatic Boxes, and Lost Strobeika, they don't seem similar enough to be considered a lift. It's possible Houdini is referring to the mind reading act he did with Bess, a version of which Herrmann did perform. But claiming this as an original creation is a stretch. So this accusation is a bit of mystery. (Herrmann would die the year this letter was written.)

Finally, you gotta love Houdini's line: "I don't drink smoke or chew and we are good useful people, dress fair and willing workers." This really gives a feel for the frontier world Houdini lived and worked in at this time.

Today we tend to think of everything before 1900 as a prelude to Houdini's real career -- the struggle. We also tend to ascribe this thinking to Houdini himself, that all was in service of some future point of success and fame. But the sense I get from reading this letter is that Houdini already considered himself a success. The kind of worldwide fame Houdini would later achieve was born of 20th century mass media and might have been inconceivable in 1896. Houdini couldn't see the future (as far as we know!), so his life on the road with Bess at this time was his career -- his 6th Annual Tour, in fact. So successful even Herrmann The Great steals from him!

A fascinating letter and a nice surprise discovery at the CFI.

Thanks to Herrmann expert James Hamilton for help with the Herrmann info.

UPDATE: In the chapter about Metamorphosis in Houdini's Fabulous Magic, Walter Gibson refers to Herrmann's "Asiatic Trunk Mystery" which he was "presenting at the time of his death in 1896." Hermann billed it as his "Original Oriental Mystery" -- words that seem very similar to what we see on this stationary. I'm now convinced the Asiatic Trunk Mystery was the act that Houdini felt Herrmann stole from him.
UPDATE: The complete letter has surfaced and has sold. Check out: Early handwritten Houdini letter sells at auction.