Magician Paul Zenon will play both himself and Houdini's chief assistant Jim Collins in Linking Rings, one of several Houdini-themed productions at the upcoming Edinburgh Festival Fringe (August 7-31). 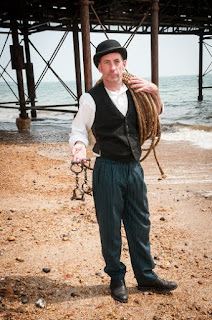 Paul Zenon is proud to present the premiere of his compelling autobiographical tale of a childhood spent in the world of wonders that was a seaside magic emporium; a story that also looks at the final weeks of the life of his hero; Harry Houdini, as told by his right-hand man Jim Collins - a man about whom, until now, very little has been known.

1926: Houdini's right-hand man deals with the death of his boss. A half century later, a Blackpool joke shop proprietor takes on a wide-eyed young protégé.

Linking Rings is an affectionate look at a misspent youth and unsung heroes; a touching true story of interlocking lives. This new work is an exciting change of direction for Paul Zenon, who has made regular appearances everywhere from Countdown to La Clique and is known as the UK pioneer of Street Magic. Not a magic show, but magical nonetheless.


In preparation for the play, Paul has done some important research on Jim Collins. Paul is the man who discovered that Collins was likely born in Portsmouth rather than the commonly accepted Irish/Scottish/Cockney origins.

Below is the official poster for Linking Rings. You notice it shows Houdini hanging from the Blackpool Tower. According to Paul, Houdini wanted to do some kind of "hanging" stunt from the tower when he was headlining at the Blackpool Hippodrome in 1905, but was refused permission to do so.


You can buy tickets to Linking Rings at Edinburgh Festival Fringe.