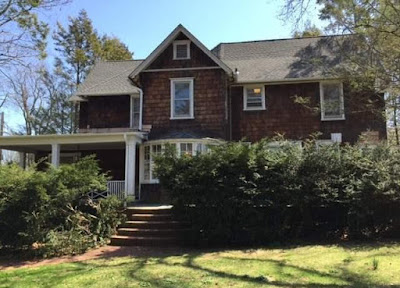 A house in Sea Cliff, New York, that once belonged to Houdini's lawyer and close confidant Bernard M.L. Ernst, has sold after coming on the market for the first time in 50 years.

Houdini visited Ernst at his Sea Cliff vacation home many times. This is where the magician famously stopped a rain storm on command during a 4th of July party. The house porch was also once the scene of seance conducted by Houdini in which he levitated a table for Ernst and his wife (a detailed description of this seance can be found in Kellock, page 305).

After Houdini's death, Bernard Ernst (who was one of Houdini's pallbearers) succeeded him as President of the Society of American Magicians. He also oversaw publication of Houdini's Escapes and Magic as well as co-authoring Houdini and Conan Doyle. Bess dedicated Houdini His Life Story to Ernst as "Houdini's Dearest Friend and Advisor."

Mrs. Ernst sold the house in 1943 and a Public Auction of "Household Furniture and Furnishings" was held at that time. One wonders if any Houdini photos, letters or treasures slipped out into the world via this auction? Ironically, the auction took place the day before Halloween.

Congrats to the new owner. And if you ever want to hold a seance, you know where to find us.

Thanks to John E. and Barbara.