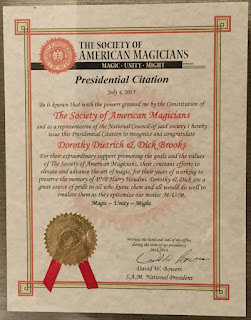 Our good friends Dorothy Dietrich and Dick Brookz of the Houdini Museum in Scranton have received a Presidential Citation from the Society of American Magicians, the highest honor that the S.A.M. can bestow. The citation from National President David Bowers recognizes "their constant efforts to elevate and advance the art of magic" and "their years of working to preserve the memory of PNP (Past National President) Harry Houdini."

Dorothy and Dick recently screened Houdini's The Grim Game at the S.A.M. National Convention in Philadelphia. Says Dorothy, "During our presentation, we talked about how Houdini would want all of his compeers of the S.A.M. to see his best film. Most members didn't realize that Houdini was responsible for promoting the S.A.M. wherever he traveled and made it grow from one club in NYC to become the National and International Organization that it still is today. The crowd loved it. We couldn't be more proud."

Congratulations on this wonderful honor from the S.A.M! Listen to Dorothy and Dick on the S.A.M. "Backstage" podcast: The Grim Game of finding Houdini.