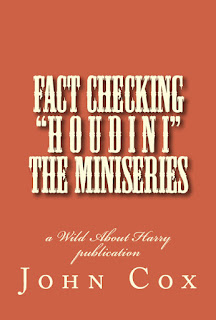 Today I'm excited to offer the first printed publication of the WILD ABOUT HARRY Press (yes, that's still a thing). Fact Checking HOUDINI The Miniseries is a printed version of my popular Houdini miniseries "Fact Check" posts from last year. But it's also more.

Included are reviews of the U.S. broadcast (History) version and the Extended DVD (Lionsgate) version, as well as something entirely new; a never before published history of the production with facts and behind-the-scenes images that you will not find anywhere online (what I show on page 9 is especially awesome). I've also packed it with photos from the miniseries and some uncommon shots of the real Harry. Here's the official description:

In 2014 the HISTORY channel aired a new biopic about the world’s most famous magician and escape artist, Harry Houdini. Written by Nicholas Meyer and starring Adrien Brody, it promised to tell the “cradle to grave” story of Houdini’s amazing career. But what was fact and what was fiction? Was Houdini really a spy? Did he have an affair with Lady Butler? In this illustrated primer, Houdini historian and blogger John Cox (www.wildabouthoudini.com) takes up the challenge and separates Fact from Fiction in the HOUDINI miniseries. Also included is a history of the production, reviews, and rare photos of the real Houdini in action. 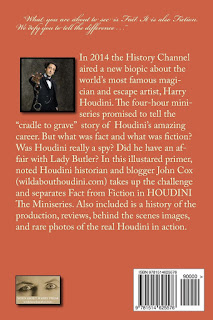 The price is $12.99, higher than what I wanted to ask, but because I opted for a color interior and all distribution channels, it's the price I'm locked into. But I really think it's worth it. This offers a nice printed record of the Houdini miniseries which, like it or not, was the Houdini event of 2014 and is now an inescapable part of Houdini history. Here in a tight 58-page fully illustrated primer you have the whole story.

You can buy Fact Checking HOUDINI The Miniseries on Amazon.com (U.S.), Amazon.co.uk (UK), or direct from CreateSpace.

Thanks so much for giving this a look. If you feel so inclined, a review on Amazon would be greatly appreciated. And if you have any questions about the book, please ask in the Comments below.