The Tony Curtis classic Houdini will air tomorrow, July 6, on MOVIES, a network still available over the airwaves in Los Angeles via KCOP channel 13-3. This makes for a somewhat nostalgic airing as KCOP was the station that showed Houdini throughout the 1970s and '80s and is where many young fans (including myself) first saw it and became interested in the world of magic and Houdini. These days Houdini typically airs on TCM. 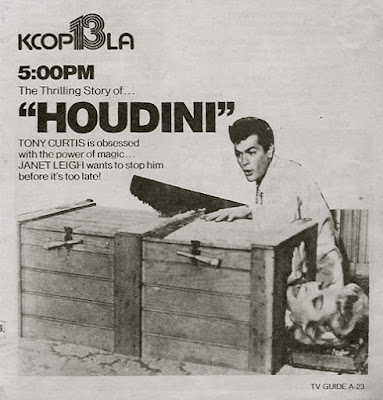 MOVIES has the film scheduled in a 2:20 block of time, which is a good sign. Back in the old days, KCOP would cut the film down to allow for commercials. Scenes that hit the cutting room floor were Harry and Bess performing at the rowdy cowboy hall and the broomstick levitation sequence. Although sometimes one of these scenes would show up in an random airing, so it was always important to watch the film each time it was shown because you never knew when you'd see a scene from Houdini that you hadn't seen before. It wasn't until VHS that one finally got to see the full, uncut film.

Today Houdini is available on DVD, Blu-ray, Netflix and Amazon Instant video. But I'm definitely going to record and watch this MOVIES/KCOP airing, and not just for the nostalgia. Who knows -- maybe the long lost Grim Game wing-walking scene will show up!