The Grim Game in Austin, Sunday

Just a reminder that TCM's restoration of Houdini's The Grim Game will screen at the historic Stateside at the Paramount theater in Austin, Texas, this Sunday, July 19 at 7pm. Composer/pianist Reuel Meditz will accompany the film with his own original score. 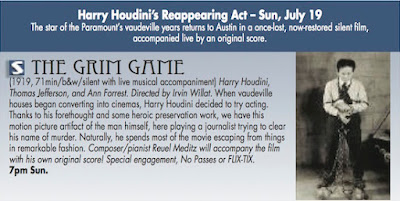 As far as I know, this is the last announced screening of The Grim Game. While the movie will eventually air on TCM, the network has yet to announce a date. So this might be the last chance to see the film until then. The Grim Game is being distributed theatrically by Park Circus.

The Stateside theater was built in 1935 and sits adjacent to the Paramount Theater where Houdini appeared in 1916. That theater recently held an event in which a Houdini hologram addressed the audience.

Tickets for The Grim Game can be purchased online or by calling the box office at (512) 474-1221. For more information visit the Austin Theater Alliance website.