"The Wizard Exposed" by H.L. Adam first appeared in the July 1901 issue of The Royal Magazine in the UK. The five-page article featured Houdini exposing "some of his simpler" magic tricks. The pages are reproduced in Walter Gibson's The Original Houdini Scrapbook (1976), but mega collector Arthur Moses shares with us scans of the original article from his collection (the largest collection of Houdini periodicals in the world). I love these early images of Houdini performing straight magic. 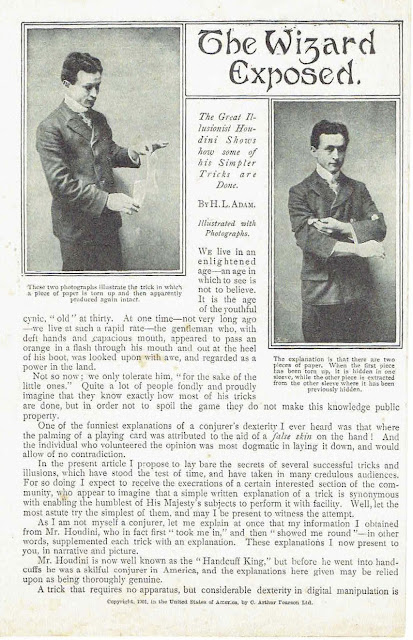 "Mr. Houdini is now well known as the "Handcuff King," but before he went into handcuffs he was a skilful [sic] conjurer in America, and the explanations here given may be relied as being thoroughly genuine." 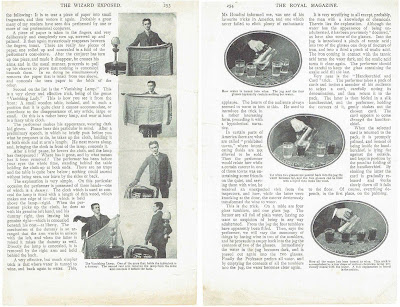 "A very effective, but much simpler trick is that where water is turned to wine, and back again to water. This, Mr. Houdini informed me, was one of his favourite tricks in America, and one which never failed to elicit plenty of enthusiastic applause." 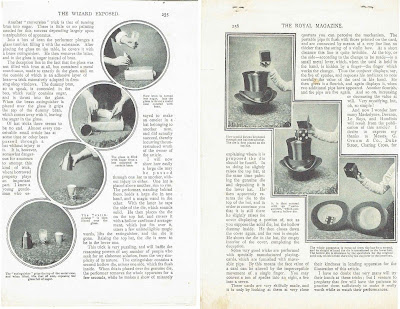 "And now I wonder how many Maskelynes, Devaneys, Le Roys, and Houdinis will result from the publication of this article. I desire to express thanks to Messrs. C. Ornum & Co., Duke Street, Charing Cross, for their kindness in lending apparatus for the illustration of this article."


Houdini once said that exposing tricks is "taking bread and butter from honest hard working ambitious magicians." But Houdini freely exposed select tricks throughout his career. I can't help but wonder how "The Wizard Exposed" was received by magicians of the day. Even though this article is written as if by an outsider, there's little doubt that Houdini was behind the entire piece, and may have even written it himself.

Arthur also recently discovered this same article in the French magazine La Petite Gironde Dans la Famille, February 25, 1902, with translated title "Tous Magiciens" (All Magicians). This time there is no byline. This was published following Houdini's first appearance in France. 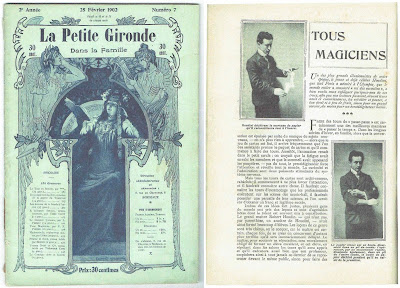