The Grim Game jail break behind the scenes

One of the highlights of Houdini's The Grim Game is the jail break sequence. Not only do we get to see Houdini escape shackles and the jail cell, but we see him use the rope from a flagpole to climb down the side of the building. It's a stunt Houdini did himself.

In the film it appears Houdini is doing his acrobatic stunts on a real building. But this photo from a magician's scrapbook housed at the Magic Castle's William Larsen Sr. Memorial Library gives us a new perspective on the stunt. 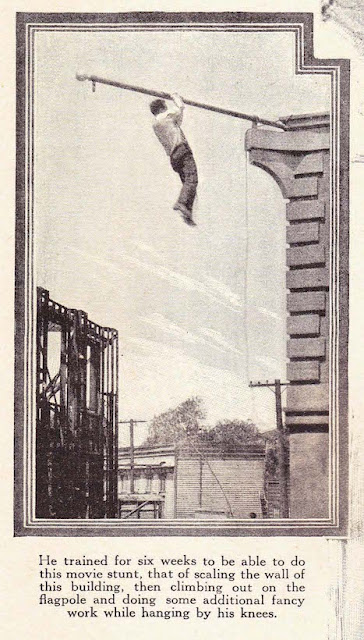 This photo shows us that Houdini's jail break was actually filmed on the Jesse Lasky Famous Players Studio backlot (confirmed by the great silent movie location archaeologist, John Bengtson). But Houdini is still far enough off the ground that he could be seriously injured or killed if he fell. In fact, at some point while filming the jail escape sequence, he did break his wrist in a fall. Below is how it appears in the film. 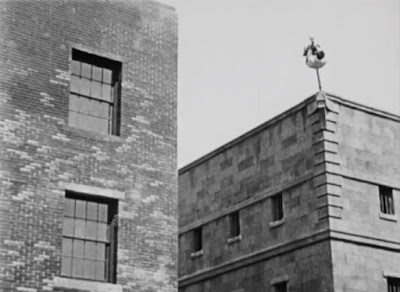 Also shot on the backlot was the crash landing of Houdini's biplane. Today the site of the former Laskey backlot sits behind The Hollywood Palladium and looks like this.

If you love this kind of stuff like I do, check out more Grim Game filming locations below, and also visist John Bengtson's amazing Silent Locations blog.